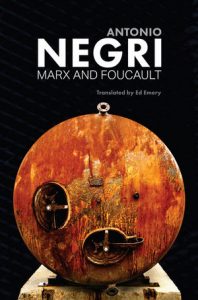 Many theoretical discussions on the current state of affairs consist of long analyses of economic and social exploitations, relegating the question of resistance to a few grim conclusions in the final chapters. As Negri pointed out in Marx beyond Marx, this is perhaps a remnant of the tendency to overemphasize the power of capital, which can be traced back to Marx himself. In this respect, Negri’s work as a whole stands out, and this latest collection of essays is no exception. Not only does he not relegate the question of resistance to a secondary position, he integrates it into the very structure of his heretical interpretation of Marx. His heterodox Marxism is committed to a theorized shift in the structure of capital and hence, in the structures of the working class itself. From 1986 onward, he has consistently claimed that class struggle has to free itself from the representation of an aged and impotent working class and to construct a new horizon of struggles, antagonisms and a new communist programme (4).

This new class, which at times seems to be made of hipsters, tech-gurus and other members of the avant-garde of immaterial capitalist production, is supposed to carry the future revolution that will lead to the emergence of a tech-savvy communist society. The most distinctive feature of Negri’s work, and simultaneously its most problematic feature, is this: Negri seems to disregard the fact that the structures of domination and exploitation are radically different for a cleaning lady and for an IT multi-national programmer even if both are citizens in a Western democracy (let alone if they are not). Even if immaterial labour tends to become hegemonic in the processes of capitalist production, it is under the condition of the ongoing exploitation of the majority of the world’s population where labour is still very much material. Hence, Negri’s Marxism, aside from its intellectual integrity and interpretative originality, reads as a Marxism not of the future but of those who understand themselves to be the future, the lower echelon of the highest echelon (the 99% of the 1% or, to be fair, citizens of highly industrialized states).

Marx and Foucault, Negri’s latest published book, is the first of an expected three volumes series of essays. It is composed of 16 relatively short texts varying in style and use of philosophical jargon. Most of the essays have been previously published in Italian online between 2010 and 2014 although there are a few exceptions of older texts. Nonetheless, there are a few threads running through the book, not very different from those running through Negri’s entire oeuvre: the development of a post-structuralist Marxism (he himself does not use the term) based on an unorthodox reading of Marx privileging the class struggle but radically changing its structure, anchoring it in a Spinozist ontology, and in the primacy of labour to produce value and new ways of being. This series of essays engages with various contemporary political thinkers (such as Badiou and Esposito), with different contemporary political issues (the crisis of social democracy, Obama’s failures), sketching throughout the essays a short history of the radical left since 1968 and the development of his own work in relation to it.

The book is divided into three parts, the first of which is composed of five essays dedicated to Marx. The texts here are mostly theoretically dense, reminiscent of Negri’s earlier style. Negri makes a convincing argument for why we need to continue reading Marx in a world that is radically different from the world in which he wrote. He gives a few reasons, political, critical and theoretical. Since capitalism, according to Negri, cannot dispose of use-value, nor of the living labour of the working class (broadly conceived), unresolvable antagonisms are generated. As work processes become more and more complex and reliant on highly trained workers and on ever-tighter collaboration, labour directly confronts the dematerializing processes of financial capitalism. Marx captured this antagonistic characteristic of capitalism in a way that has yet to be surpassed (20-21). Another reason is that Marx, differently from his many interpreters throughout the last one hundred and fifty years, never reduced the transformations that capitalism induces to (solely) fetishistic or irrational tendencies. Real subsumption has introduced transformations that challenge the structures that enabled it. Nonetheless, they have also challenged Marx’s theories. Hence, what is required according to Negri is for critique to become not only a tool to change the world but a weapon to construct a “new theory of labour value as a common potentiality” (29). However, as is well known, his interpretation of Marx changes a few crucial elements. For example, for Negri, Marxist dialectic is blocked; it was “interrupted” due to the processes of real subsumption. The relation between power and resistance has only been able to tilt in the direction of resistance once again due to the formation of a new revolutionary class within the space of that interruption (33). The interruption is reinterpreted as a positive “opening” of the dialectical relation of capital and labour. This opening enables the immediate expression of the revolutionary subject that produces itself repeatedly through the formation of the commons.

The six essays in the second part have a more journalistic/autobiographical feel to them. The two first essays highlight the ‘Italian difference’ in critical political philosophy, a difference Negri puts simultaneously in question on the philosophical level (in ‘On Italian Theory’) and affirms as a historical development directly related to the Italian autonomous movement and the refusal to (and of) work (in ‘An Italian Breakpoint’). In these texts Negri engages with the work of Agamben and Esposito, distinguishing his own work from theirs (hence, rejecting Italian theory as a school) as the only one which does not start with the individualistic reference characteristic of political philosophy in general. In another essay, Negri addresses the question whether the left can reconstitute itself in the face of ongoing challenges and repeated electoral failures. He believes that it can through a platform calling for a radical reform of the state as the institution that can guarantee and protect democratic access to the commons (109).

The third and last part of the book contains primarily texts related to French Post-Structuralism, specifically Foucault, and ‘Deleuze-Guattari’ (166). Forty years separate the first and the second chapter of part three, both relating to Negri’s reading of Foucault. The interaction between the two texts, which Negri himself refers to (155), will be of interest to his commentators and future biographers. Chapter 12, ‘On the Method of Political Critique’, published in 1978 and written while he was teaching and developing his ‘revisionist’ reading of Marx in light of the Grundrisse at the ENS in Paris, adopts a critical stance towards Foucault. Chapter 13 puts forward a much more favourable reading of Foucault, reread in the light of Deleuze’s ‘On Societies of Control.’ According to Negri, the failings of his former text, and of other interpretations of Foucault’s work of the time, is that no clear distinction was made between biopower and biopolitics. Negri understands these two concepts in light of the Spinozist distinction between potestas and potentia. While biopower is the hold of power over life, which needs to dominate life in order to exist, biopolitics is the affirmation of potentiality. Only biopolitics produces new forms of life and subjectivities, while biopower merely reproduces them in order to maintain its hold. However, behind Marx and Foucault, or prior to them, there is another author (or authors) that shapes and conditions Negri’s reading. In an essay dedicated to the two, he treats them as one author and focuses on their joint work. Much as the previous text did with Foucault, this text explains the how and why of Deleuze and Guattari for Negri. Moreover, it makes evidently clear that the vitalist philosophy characteristic of the Anti-Oedipus and A Thousand Plateaux is the infrastructure of Negri’s later work (from the end of the seventies onward). According to Negri, for the two power is potentiality. Hence, it resides in struggle and resistance, which were radically transformed by the publication of the Anti-Oedipus, from the question of class to the question of subjection, the production of subjectivity itself (171).

A radical historicisation of the critique of political economy; recognition of the class struggles of labour power as the motor of capitalist development; subjectification in the struggles of labour power, of living labour, and the adjustment of producer bodies to the change in the relations of production; and finally, the definition of a subjectification open to the common. (197)

However, for Negri it is not the Foucault of the seventies that is of relevance to this effort of reinterpretation. It is the later Foucault, that of Greek and Roman Antiquity who is relevant. The Foucault of the eighties goes beyond a distinction between individual and collective, toward a collective subjectification to a self grasped in a Deleuzian manner, as a singularity (194). It is here that Negri’s optimistic, and at times even naïve, vision of technology is formulated most clearly. Technology allows for processes of collective subjectification; it forces the labour process crucial for this new, updated, proletariat to become ever more common, collaborative and immaterial.

The book, more than other texts by Negri, facilitates a critical question that is left unanswered. The question one must ask, without ever being a purist or an orthodox Marxist, is just how much of Marx is left standing after Negri has acted his extensive Deleuzian-Guattarian reformulation. When does a theoretical endeavour that, to all appearances, is committed to Marx, stops being one? If the composition of the proletariat has shifted from workers to disgruntled students protesting on high tuitions in Western European democracies to techs kids in the US, if materialist dialectics has been replaced with desiring production, if humans and machines are synonymous, and if resistance has the ontological primacy of life itself, what is precisely left of Marxian theory? Negri has insisted throughout all his work on his politico-theoretical affiliations, yet how are we to understand his insistence that all the shifts he has been making can be found already in Marx’s work itself? Marx and Foucault does not answer the question, but renders explicit the reciprocal fertilization that Negri has achieved between Marxism and post-68 French theory. This is its greatest merit. Whether one is convinced by it, is a different matter altogether.