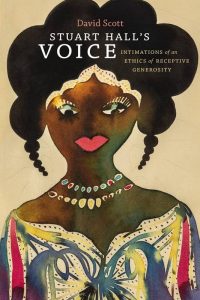 Nick Malherbe is a researcher at the Institute for Social and Health Sciences, University of South …

Those looking to become better acquainted with Stuart Hall’s oeuvre will be disappointed if they are hoping to do so through David Scott’s latest book, Stuart Hall’s Voice: Intimations of an Ethics of Receptive Generosity. Indeed, when the book does engage Hall’s work, it is only as a way of thinking through its principle subject: dialogical learning in the context of Scott’s ‘intellectual friendship’ with Hall, who passed away in February 2014. Scott skilfully argues for Hall’s voice as the site of such learning, and in so doing makes a case for the formalistic character of Hall’s work (namely, the ethos of style inherent to his intellectual voice) as an enriching, fundamental, examinable, yet largely overlooked, part of this work.

The book emerges out of a set of lectures that Scott delivered at the University of the Western Cape a few months before Hall’s death. Although Hall is said to have found these lectures a ‘plausible and intelligible’ (2) way of approaching his work, the manner by which the book is structured (a series of letters addressed to Hall) leads us to presume that the book makes a considerable departure from the lectures. Scott seems perpetually aware of the unusualness of his book’s literary form which, through footnoted personal letters, attempts to speak to the general reader about the style of Stuart Hall, via a posthumous ‘dialogue’ with Hall himself.

At times, Scott appears to submit to the difficulties of constructing a book in this manner. He concedes to being unsure of which tense to use and tends to repeat himself at certain points, sometimes assuming an apologetic tone when broaching particular topics. Yet, the corollary of this cautious style is the remarkably sensitive way by which Scott approaches his book’s subject matter. He regularly reminds Hall (and, therefore, also the reader) when he employs the kind of philosophical-political language that counters Hall’s cultural-political orientation. Additionally, his asking for Hall’s patience as well as whether or not Hall would agree with his numerous assessments of style serves to characterise each letter with a degree of warmth and personal depth that reflects genuine friendship.

While Scott, who is considerably younger than Hall, admits to his ‘persisting inability to release [Hall] into a final past’ (1), the book’s epistolary form does not serve the purpose of sentimentality. To the contrary, the letters provide for Scott a way of listening to the dialogical voice that is said to have marked Hall’s style. And it is to great success that Scott takes on this difficult task of considering the ethics inherent to this style – what he calls Hall’s way of thinking – which he believes is indispensable to understanding Hall’s work. Certainly, for Scott, it is not Hall’s views per se that are most important when considering his work. Rather, it is Hall’s dialogical speaking-listening – which employs a perennial reciprocity to the ‘embodied motion’ (39) of thought and ideas – that is perhaps his most significant legacy. In this way, even when we fundamentally disagree with Hall, as Scott seems to do in some respects, we are able to learn from his inimitable style.

Scott repeatedly insists that his task is to clarify rather than interpret Hall’s way of thinking. Consequently, throughout the book he highlights the intellectual tensions between himself and Hall in order to demonstrate that, if harnessed through an ethos of listening, such tension is able to give way to a particular kind of dialogical thinking. It is therefore entirely compatible with Scott’s project that he chooses to examine Hall’s style against the work of writers like Arendt, for whom Hall had little time, Wittgenstein, whose work Hall seemed to reference only obliquely, and Heidegger, for whom Scott can only speculate Hall’s assessment. Even thinkers like Fanon, whose work both writers have engaged, holds, for each, a very different sort of relevance. By examining sensitively Hall’s style through writers and methods of thinking which hold intellectual authority for Scott, rather than for Hall, the book employs a dialogical style of its own which opens up hermeneutic space within which the reader is implicitly invited to reflect on and engage Scott’s unidirectional ‘conversation’ with Hall.

Scott describes Hall’s ethics of style in numerous ways. At a rudimentary level, such an ethics can be identified in the clarity with which Hall spoke out against various intersecting modes of injustice. In this regard, it must be emphasised, Hall’s work still holds tremendous relevance for on-going struggles that are being fought by, as well as within, today’s Left. With respect to Hall’s intellectual concerns, his preoccupation with the notions of conjuncture, identity and contingency, Scott argues, signify his ethical attitude towards historicising the present and imagining emancipatory futures.

For me, however, the book’s consideration of Hall’s ethics of style, what Scott calls his ‘dialogical ethics’ (116), is most convincing when it examines how such style exhibits both a critical self (the agent of critique) and a listening self (the agent of attunement and receptivity). Indeed, it is by speaking and listening, Scott notes, that Hall’s voice is able to enlarge its own self-awareness by engaging the awareness of others. Here, Scott borrows a phrase from Romand Coles when he remarks that Hall displays an ‘ethics of receptive generosity’, which we might understand as a mode of giving that is at the same time one of receiving. Embodying an ethics of receptive generosity demands of us an exposure to intellectual currents that are not our own, and in this way also requires that we relinquish any desire for a masterful giving. In the case of Hall, this was exemplified through his attunement and deep listening to a plurality of voices, marginalisations and identities. Scott’s insistence on Hall’s ethics as constituting both style and content is perhaps one of the book’s most fascinating and important contributions.

It is Hall’s ethos of style, coupled with his refusal to assume the position of the abstract and disembodied theorist, that makes him such an outstanding, anti-essentialist thinker both in the Marxist tradition and, more broadly, within the academy, which tends to favour language that is mystifying, jargon-laden and – to use Lewis Gordon’s phrasing – disciplinarily decadent. Yet, it is these features of Hall’s voice which, although celebrated, have garnered criticism. Scott considers this with his own critique of Terry Eagleton’s well-known and, it must be said, rather arrogant and unreflective, polemic against Hall’s work, published in the London Review of Books in 1996. In response to Eagleton’s claim that Hall is merely a follower of intellectual trends, Scott argues (successfully, in my view) that it is the contradictions, breadth and variations exhibited by Hall’s voice that equipped him to engage a plethora of questions in a manner that brought them into the urgency of the present, or, as Hall might have put it, the present ‘conjuncture’.

Perhaps it is due to the novelty of the book’s analytical focus and form that there are, in my opinion, moments where Scott seems to over-consider his subject matter. For instance, Scott insists that Hall’s dialogical style is exemplified in the fact that he always wrote for, and to, an imagined addressee or audience. However, is this not the case for all writing intended for publication? Elsewhere, Scott maintains that Hall’s reliance on the essay form is likely due to it being a closer approximation to the spoken voice – what he calls the act of ‘thinking-aloud-as-writing’ (64) – than other non-fictive forms of writing. I found myself asking whether this is necessarily true, and if it is, is it true of all essays?

Although demonstrating, to superb effect, a listening self, there are times in the book when, I feel, Scott’s critical self is found somewhat wanting. I realise that it could be argued convincingly that in asserting this I am missing the very point of the book, which – instead of offering an arrogant, all-knowing interpretation of Hall’s work, akin to the sort of hermeneutics that characterises so much of the academy – is clear, from the outset, in its programme to clarify Hall’s listening style. Yet, I believe that this remarkable book would have been further enriched had its author critically evaluated instances of Hall’s embodiment of an ethics of receptive generosity, perhaps by exploring whether some of his essays were more successful in this regard than others.

Scott’s short book is an exciting, and in my view, triumphant and sensitive exploration into a tricky and fascinating topic. We may only hope that more work attempts to explore the style and ways of thinking exhibited by, not only academic thinkers, but also other cultural and political figures. Certainly, considerations into the critical self exhibited by someone like Mikhail Gorbachev, the listening self of a figure like Thabo Mbeki, or the ethos of style displayed by Aung San Suu Kyi would offer us, by granting to style the status of content, novel and fascinating modes of understanding. Perhaps more than anything else, Scott’s book serves as a welcome reminder that to think comprehensively with and through the work of Stuart Hall, we cannot neglect his powerful voice which, in exhibiting a particular kind of stylistic ethos, embraced listening and learning as much, if not more, than it did speaking and teaching.