Marx & Philosophy Review of BooksReviews‘Knowledge and Ideology: The Epistemology of Social and Political Critique’ reviewed by Chris Byron 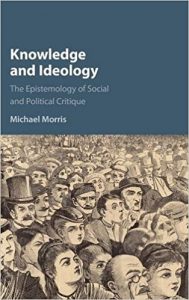 Michael Morris
Knowledge and Ideology: The Epistemology of Social and Political Critique

In Knowledge and Ideology: The Epistemology of Social and Political Critique, Michael Morris accomplishes several laudable tasks. The first, and perhaps most important, is that whether or not his primary thesis succeeds or fails (more below), his historical account of the development of ideological theory, and his summaries of particular ideological and epistemological theories, is keen. The scope of his histories and summaries entails engaging discussions of Bacon, Rousseau, Kant, Hegel, Stirner, Nietzsche, Marx, Freud, Foucault, Mannheim, Lukacs, Eagleton, Althusser, and a host of other illuminating thinkers. Morris consistently captures the essence of their theories. If everything else about this book was a disaster, and it is not, it would still be worth reading for these histories and summaries.

The second laudable task Morris achieves is his – to my mind – devastating critique of postmodern and functional theories of ideology. Borrowing from Eagleton, Morris defines functional ideological critique as “shorthand for a form of criticism that principally focuses upon the effects or functions of beliefs” in addition to sometimes considering their “origins, associations, and distributive tendencies” (3). In the hands of certain post-Marxist and postmodern thinkers, Morris argues that functional ideological critique ultimately leads to “political apathy, lazy cynicism, impregnable fideism, and destructive nihilism” (23). Marxists have long been weary of certain nihilistic strains and tendencies in postmodern thought, and postmodernism’s often dangerous relationship with fideism (who can forget Foucault’s brief support of the Ayatollah?). This weariness and suspicion is consummately explained and defended by Morris. Again, if all other aspects of the book were a disaster, these sections would nevertheless be worth reading.

The third laudable task is just how many ingenious arguments Morris is capable of condensing into this three-hundred page work. Whether or not his claims all hold together, the scope and depth of his thinking, along with its parsimony, is admirable. Morris aims to solidify four key claims, but nested within each of the four primary claims are a host of other arguments, all resonating from his keen history and summaries.

The first primary claim is that “the ascendance of functional ideology critique has revealed the inextricably interested and socially located nature of all but perhaps the most rarified forms of human thought” (22). In this regard Morris is complimentary of many post-Marxist and postmodern thinkers. The one thing he is confident they are right about is that previous theories of epistemology, especially those divorced from social life, are no longer plausible. Even if the consequences of this position are prima facie quite negative, it does not follow that these thinkers are wrong to critique non-social forms of epistemology. Given that knowledge is almost always historically and socially embedded, Morris aims to defend a theory of ideological critique which allows for acceptance of the social as universally instantiated, with a telos, in a neo-Hegelian sense, and critiques the more Kantian and Habermasian theories which seek to find the universal in some form of transcendental human/subject structure. This rejection of the transcendent subject places him dangerously close to his postmodern enemies.

Fortunately, the second primary argument is the one referred to above which deals with the fideism, nihilism, and cynicism of certain functional strands of ideological and postmodern critiques. Morris’s primary concern seems to be that thinkers of this postmodern and functional strand, in their implicit nihilism, cannot avoid advocating violence. At lease if they cannot avoid advocating it, they have no reason not to advocate it; for instance, we should not forget the Nietzsche’s claim in Twilight of the Idols that “Freedom means that the manly instincts which delight in war and victory dominate over other instincts” (2008, 65). Ultimately if all conceptual schemes regarding human reason and all epistemological theories are mere discourses in a structure of power, there is no reason or sound judgment that can insist on a non-violent alternative to the present power schematic. Moreover, there is nothing unreasonable about opposing the present power schematic (e.g., liberalism) with a more violent alternative (e.g., fascism or Stalinism). While there is nothing fundamentally new about this point, Morris’s ability to make this point within a historical summary of the development of functionalist critiques of ideology, as told through its greatest thinkers, is what makes his claim so compelling. In a sense, this section of the book is a rare treat, à la Althusser, in genuine class warfare in philosophical theory.

The third primary argument is nested within Morris’ desire to defend Marx’s theory of ideology from criticism and erroneous development. Morris is able to counter post-Marxist, postmodern, and functionalist critiques of ideology by showing that their origin is all too often concerned with bohemian and aesthetic social conflicts, and thus is not grounded in concerns of alienation, social (re)production, human abasement, and most importantly for many Marxists, exploitation. By side stepping, or all too often flat out ignoring these socialistic and Marxian concerns, these non-Marxian ideological critiques have no serious grounding for rejecting fascism and nihilistic projects. Instead the social aims which give rise to a theory of ideological critique (i.e., alienation, exploitation, social production) need to be the very basis for assessing the veracity of ideological critique. It is in this sense that Morris conducts an interesting inversion and is able to make an ideological critique of functionalist ideological critique and its historical development.

Given the structural outline offered above, Morris then aims to show just how a neo-Hegelian and neo-Marxist theory can still work as a system for ideological critique and epistemic knowledge. The most interesting and problematic claim here is that although his newly created theory is aimed at such broad and intriguing goals, it is a theory that is to be found in a charitable reading of the works of Marx. However, in order to fortify and reveal the construction of this charitable Marxist theory, he insists that he must draw on Mannheim’s sociology of knowledge, Lukacs’ social ontology, and psychoanalytic insights from Freud, Althusser, Zizek, and Habermas. It is at this point in the book that things become both dense and perplexing.

One issue I have is that Morris seems to be arguing that the insights of the thinkers just mentioned are already contained in Marx’s theory of ideology, or at least are extractable from it, which is a problem (1-5 & 288-290). Philosophers often have a tendency to understand thinkers through the categories and lexicon of the present and/or their chosen field of specialty, instead of trying to understand past philosophers on their own terms. (Morris is by no means alone in doing this, and perhaps he is right to do so and my concerns are unfounded, too conservative, or irrational). Thus phrases and terms like “doxatic apathy”, “cognitive commitment”, “functional and genetic considerations”, and “epistemic challenges” are used to explain Marx’s theory. This is at the very least peculiar given that Marx neither used such vocabulary, nor did he seem even loosely interested in “epistemic challenges”, and “doxatic” matters. If anything he seemed hostile to such philosophical issues. For instance Marx says:  “the dispute over the reality or non-reality of thinking that is isolated from practice is a purely scholastic question.” In this case Marx is seemingly using the word scholastic as a pejorative, since he follows this claim with the even more famous pronouncement that “philosophers have only interpreted the world, in various ways; the point is to change it.” Thus I find it troubling to bring the language of philosophers, as some external tool-kit, into the theories, writings, and issues, Marx was predominantly concerned with (N.B. this is a separate issue from whether or not philosophers want to bring ideas of Marx’s into philosophy – the direction of appropriation matters).

Nevertheless, Morris’s thesis is quite Marxist and very much in line with other aspects of Marx’s ‘Theses on Feuerbach’. He argues that the riddle to the problem about making claims of substance regarding social reality, that does not fall back on the problems of postmodern thought outlined above, is to be achieved by recognizing that “social reality receives its structure through the practical activities from which our knowledge-constituting aims themselves emerge, though the cognitively reflected form of these aims often involved significant distortions”, moreover, “the object of knowledge is the actual object formed by our practical activity” (281). Unfortunately Morris only spends around ten pages really fleshing out his very interesting thesis.  Given that the text is three hundred pages, this feels much too short. Moreover, some concrete contemporary and historical examples would have fortified his claim. Although to repeat my point from the opening paragraph, the veracity of the thesis does not change the quality of the book overall, which is laudable. No doubt Morris will have more to say in future works and essays about this thesis, and hopefully it will also be applied to the swelter of ideological issues emanating from our post-truth Trumpist landscape.