Marx & Philosophy Review of BooksReviews‘Northern Ireland and the Crisis of Anti-Racism: Rethinking Racism and Sectarianism’ reviewed by Guy Lancaster 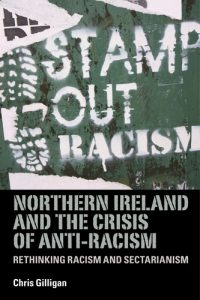 Chris Gilligan
Northern Ireland and the Crisis of Anti-Racism: Rethinking Racism and Sectarianism

When it comes to matters of race and racism, Europe in the twenty-first century seems stuck in what could be described as either a crisis of amnesia or a crisis of definition. By this, I mean that Europe’s surprise at the meaning of race for so many of its citizens—or, at least, the rhetorical power of race—in the wake of both significant migration into Europe and the intra-European migration facilitated by the European Union, could, on the one hand, result from a lack of memory regarding the history of previous eras. Postwar Finnish migration into Sweden, Indian migration into the United Kingdom, Turkish migration into Germany—all of these sparked backlashes and raised questions of national identity that we can see reflected in current debates. On the other hand, the present crisis could be one of definition. After all, Europe, despite being the progenitor of race as a modern concept, has been loathed to assign any meaning to race within its own borders, insisting that it does not suffer from the same mania afflicting the United States or South Africa. However, this ignores a long history of intra-European racism. Swedish scientists, for example, once marked the Finns as an inferior race by reference to cranial measurements and linguistic analysis—the exact same tools Europeans used to justify white supremacy in the wider world. Violent conflict in Europe, as of that which occurred in Northern Ireland, has typically been described as ethnic or sectarian, despite a significant body of theory that sees significant overlap between those categories and race.

Of course, the problem of amnesia relates directly to the problem of definition—Europe has been shocked at the presence of persistent racism within its borders precisely because it has defined racism as something separate from its own history (even while acknowledging “exceptions” like the Holocaust). Few places   exhibit this typically limited European approach to racism better than Northern Ireland, which, due to its long history of strife, has been treated as an aberration, sidelined from studies of both the United Kingdom and Europe as a whole. As Chris Gilligan writes in the introduction to Northern Ireland and the Crisis of Anti-Racism, “The idea that Northern Ireland is a place apart is not an innocent one. It is a place apart, not because it is unique, but because it suits a lot of different interests to treat it that way” (5). The experience of Northern Ireland is ignored in large part, he asserts, because the persistence of sectarianism alongside “newer” manifestations of racism calls into question the exact dividing line between these two ostensibly separate social phenomena—and, thus, also raises doubts about the nature and utility of official anti-racist policies. Indeed, the impulse toward violence against an identified “other” is rooted in neither race nor religion but, instead, an economic system that generates inequality, and the reason official anti-racism cannot but fail is because it remains rooted in that same system.

Gilligan first tackles the relationship between sectarianism and racism, noting that difficulties of single-cause ascriptions when dealing with events like a Polish immigrant being attacked while wearing a Glasgow Celtic football top within a Protestant area—does one describe this as political, ethnic, or religious violence? After analyzing an array of viewpoints, Gilligan concludes: “Racism does take different forms, in different countries, at different times in history, for different racialised groups and in different parts of the same country. Some of the confusions that have dogged the discussion of racism and sectarianism can be avoided if we think of sectarianism as being a form of racism and if we think of racism not as a singular phenomenon, but as taking many different forms” (44). Of course, definitions of racism shape policies designed to combat it, and a limited understanding of the nature of racism has produced the “Race Relations” approach centered upon the social interactions between “races”—an approach that sees prejudice as the result of innate dispositions rather than a reaction to outward circumstances. This has often led to important social phenomena being misinterpreted. As Gilligan observes: “During the violent conflict in Northern Ireland thousands of people moved away from ‘mixed’ residential areas to live alongside co-religionists, not because they were motivated by prejudice… but from a desire to live in a safer environment. The effect of these rational responses, however, is to further entrench division” (61).

Government and business co-option of anti-racism have promoted the disavowal of racism without challenging the conditions and structures from which it emerges. Thus does capitalism produces both racism and anti-racism: the former because it creates disruption and inequalities and then seeks to naturalize those inequalities by reference to something outside the system, the latter because capitalist societies also require some level of predictability and thus desire order and stability within the world. Current debates regarding the European “migrant crisis” illustrate the divide between official anti-racism—with its focus upon stability—and a more emancipatory goal; as Gilligan writes in his preface: “From the perspective of European institutions, including nation-states, the crisis is the difficulty of how to deal with the problem of migration. From the perspective of humanity, the crisis is the inability of the social system to treat migrants as human beings” (x). In fact, United Kingdom race relations legislation—which was not extended to North Ireland for decades—includes exceptions for immigration.

The Race Relations approach officially aims to tackle racism but takes as its foundation the racist assumption that human beings do exist in discrete social groups—i.e. “races.” Thus, it ends up reifying these groups and, in fact, making them competitors for state favor and resources. But the shift from civil rights to multiculturalism in Northern Ireland was not fore-ordained; indeed, it was made possible “by the, implicit or explicit, assumption of the nation-state as the medium through which sectarian ideas and practices could be overcome” (144). No accident, then, that multicultural policy for Northern Ireland took root under the premiership of Margaret Thatcher, nor that the peace process of the 1990s used the multicultural mode to marginalize the citizenry: “Aspiration was presented as leading to conflict. Inclusion and dialogue were presented as both a means and a mode for different ‘traditions’ to live together. All of this was considered necessary to demobilise the population of Northern Ireland and shift them from a conflict orientation, and ‘re-educate’ them as consumers of politics rather than active makers in the future of society” (154). Further marking a shift from earlier emancipatory anti-racism is the rise of hate crime legislation, which not only psychologizes hate but also solidifies the authority of the capitalist state by promoting a politics of recognition, whereby designated groups achieve “protected” status (and are thus ascribed with some inherent vulnerability), rather than a politics of liberation that aims to reduce the vulnerability of individuals and groups.

Gilligan’s book is part of a growing body of work that incarnates racist ideas explicitly within our shared history in order to counter those who have a vested interest in naturalizing racism, in presenting it as something eternal to the human experience or fundamental to human psychology. Like Race Defaced: Paradigms of Pessimism, Politics of Possibility (2012) by Christopher Kyriakides and Rodolfo D. Torres, or Patrick Wolfe’s Traces of History: Elementary Structures of Race (2016), this volume explicitly locates the source of racism in the inequalities of the capitalist system but never oversimplifies the relationship—or the solution to the problem. After all, inequality fosters racism, but racism then fosters further inequality as people become invested in their positions of privilege and the collective identities that come with them. Furthermore, people’s identities are multipolar, and emancipatory work can stall whenever some of these identities (religion, ethnicity, class, nationality) are prioritized by the groups working for collective liberation. Gilligan’s history lessons, thus, are not simply about the emergence and reification of race and racism—his tracing of political movements that worked for emancipation also illustrates the pitfalls of limiting one’s perspective to a unipolar identity, of working to liberate Catholics or workers or ethnic Irish without giving thought to how these identities intersect and how they are differentially valued by the individuals who claim them.

“The traditional left argument that racism is a ruling-class tool used to divide the working class is obviously inadequate in an age when anti-racism is one of the issues that divides the working class,” writes Gilligan in his conclusion (197). In fact, official anti-racism efforts often locate racism and xenophobia within the lower classes rather than in a social system that produces alienation. Therefore, only human emancipation can truly counter racism; anything short of that only reifies the false division in humanity that produces racisms in the first place. Thus, not only is Gilligan’s book an important contribution to the scholarship on Northern Ireland, and to the debates on the nature of race and racism—it charts a path forward, away from the (paradoxically) conformist multiculturalism of state policy and to a future of freedom for the whole of humankind.