Marx & Philosophy Review of BooksReviews‘Reckless Opportunists: Elites at the End of the Establishment ’ reviewed by Patrick Ainley 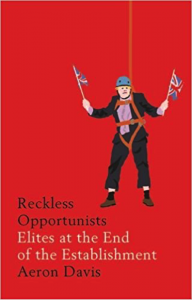 Aeron Davis
Reckless Opportunists: Elites at the End of the Establishment

Davis concludes his Reckless Opportunists with the remark that, ‘[i]n a remotely sane world, neither Boris Johnson nor Michael Gove would be in charge of anything’ (132). The question his book poses is how such reckless opportunists, especially Johnson whose unscrupulous personal ambitions are as plain as his serial mendacities and incompetence, now dominate the world’s oldest capitalist political party and are driving the former-imperial power it oversaw so successfully for so long towards economic dislocation and global relegation. Davis’s answer is sociological, seeing the disintegration of the ‘Establishment’ into competing elites unable to combine in imposing traditional ruling-class hegemony. This relates to the philosophical question of what has become of public knowledge in today’s post-ideological era – which was the previous subject of Davis’s edited collection – since there is no longer hegemonic agreement on what constitutes the public realm of information and large parts of it have been privatised.

Like Marx’s ‘ruling caste’ of politicians who ruled on behalf of capital, Davis concedes that elements of the Establishment are still fed by the effortless progression from Clarendon schools to Oxbridge and Sandhurst via the senior judiciary and armed forces to ‘that gilded care home (or finishing school) known as the House of Lords’ (11). However, he argues that this can no longer be taken for granted by those aspiring to new and increasingly more influential positions in what has become of the City, taken over by financiers and accountants cum consultants and opened to foreign investors since Big Bang in 1986. Even the first division of the civil service has long been emulating private enterprise since Prime Minister Heath followed the recommendations of the 1968 Fulton Committee to ‘hive off’ units within departments complementing independent ‘delivery’ by executives outside them. At the same time, these top positions have been attenuated by the social polarisation evident since Thatcher which has widened the gap between those at the very top and those further down. At their apex, moreover, the new elites have become increasingly permeable and internationalised, connected across networks of the Davos type. As terms of office become shorter, working to targets to maximise shareholder value increases the frenetic pace and encourages speculation for a quick turn-around. There is therefore less shared expertise, save only in the imitative art of climbing the greasy pole as quickly as possible to make a fast buck and get out. The new elites are thus decreasingly capable of cooperation – witness Johnson and Gove again. Running the country like UK plc, politicians also rapidly rotate through ministerial posts before exiting from ever more swiftly revolving doors. In addition, they have come to think of themselves as another business elite and therefore similarly entitled to the same privileges as those whose private interests they serve so directly.

This ‘modern establishment’ of media and other corporations, the City, Whitehall and Westminster are typified by the ‘over 350 people’ Davis has interviewed and observed during the past 20 years to provide the evidence base for this study. Out of their own mouths he condemns them for the venal self-interest which churns journalism into public relations and investment into risk-avoiding speculation, while chief civil servants dismantle their own departments and outsource their own jobs.

The results are fewer news consumers, party members, companies, employees and engaged citizens. Eventually that erosion of the public base also means the disestablishment of those same institutions through which elite power is wielded. (24)

Similarly, politicians cut off the branches they are sitting on in hopes this will depoliticise decision-making so that they can avoid judgment by following procedure to avoid blame, ever dealing with ‘issues’ as they arise but never their interrelated causes. The consequence, in the verdict of Peter Hitchens (of all people!) on the result of last year’s general election: ‘May’s Conservative Party failed because they have long believed in nothing and are interested only in being in office … just a cold machine which runs on gallons of expensive snake oil.’ (32)

So what could an opposition do to break with the structures and behaviours that have been put in place over the past 40 years and more, supposing it could overcome their resistance in the way that Labour might have done last year had Corbyn accepted the offer of an anti-austerity alliance first made by the Greens and Nationalists when he became Labour leader in 2015? Davis provides a list at the end of his book (139-42): enforce transparency to provide neutral public information in the interest of checks and balances, not leaving this to self-policing by the organisations involved – ‘culture and ethics are poor mechanisms’ (142) –, so resolving conflicts of interest between competing elite institutions, properly punishing elite crimes, scrapping the bonus system and reforming the intermediary professions of lobbyists, accountants and lawyers. Under ‘ideas and innovation’ he suggests, ‘[f]orget social mobility, it’s inequality stupid!’ but don’t forget that ‘[m]ore markets are not the only answer’ (141).

However, just as the Bauman-like soup of ‘liquid modernity’, in which ‘all that is solid melts into air’, has dissolved the Establishment into competing elites, amongst the employed population also the loss of communities of labour has disintegrated shared class identities towards massified groups, their remaining commonalities of experience targeted by individualising new media to further loosen traditional political allegiances. Although this is not Davis’s focus of interest, it is essential for the continued functioning of the whole that economically exploited classes persist below the elites which continue to preside over the state and society they are destabilising. So it could be said that just as the welfare state was abandoned in a desperate attempt to resolve the 1970s crisis of accumulation by imposing a free-market state, so this state in turn is changing under the austerity that was presented by the Coalition government as a temporary adjustment following the crash of 2007-8, towards a permanent austerity state in which the personal and public debt that underwrote new-market state borrowing will be consolidated. Further, that this is already driving a growing proportion of the population into penury with perhaps 40% of employees now in low-paid, insecure and unskilled precarious labour, including various forms of self-employment in the gig economy. Despite ‘record levels of employment’, what can be called a reconstituted reserve army of labour, often working at several part-time jobs simultaneously, threatens the security of those in the new working-middle/middle-working class of society who desperately run up a down-escalator of endless education and training in emulation of the elites above. Like the nearly half of school leavers who become Further/ Higher (Tertiary) Education students, they aspire to previously secure managerial and professional occupations that are relentlessly undermined by outsourcing and automation.

Yet such a dystopia is the goal of the True Believing Brexiteers for whom it provides the template upon which to run society as an economy in which responsibility is contracted out to individuals while power contracts to the elites. Or at least this is the aim of those outwith what Davis calls the Tory Party groupthink whose nostalgic and xenophobic obsessions drove the referendum, amplified by the Eurosceptic owners of the right-wing press. Primarily Michael Gove, who in 2005 published with 22 other male MPs, MEPs, journalists and others, a pamphlet with the odd title Direct Democracy, An Agenda for a New Model Party. Unsurprisingly, given Gove’s subsequent record as Education Secretary, the pamphlet proposes vouchers for schools and charging what the market will bear for student fees, whilst Jeremy Hunt joins in endorsing a two-tier NHS, amidst other radical schemes for the privatisation of remaining local government services under US-style mayors, including the police with Crime Commissioners. All these will be ‘unbundled’ amidst the popular ‘enthusiasm’ generated by leaving the EU! Ideology – not mere ‘groupthink’ – thus still plays a role in events, even if its full implications in the attempted construction of a new hegemony are only partially understood by most of its elite followers.

Such an historical typology of welfare to free-market to consolidated austerity state forms, together with accompanying changes in society and the economy, would afford a comparison with the EU’s own continuing consolidation under German banker capitalism. But even within Davis’s concentration upon the English establishment, whose sudden dissolution is the more remarkable considering its previous long-term continuity and solidity, such a framework might also enable some estimation of likely future developments for ‘global Britain’, where the currently threatened sell-off of GKN to an asset-stripper and the printing of the new national passports by a Franco-Dutch company are likely to become typical. Such a schematisation would amount to more than the concatenation of coincidences from which Davis deduces his explanation of how the milieu developed in which today’s reckless opportunists are able to operate unchecked. For such opportunists are always with us, instance Johnson (again) combining in one perennially cartoonish character aspects of Bunter with Flashman. They would be prevented from taking such liberties if they were constrained by a written constitution, for instance. This would not have permitted the on-going coup carried out by the referendum, let alone that the tail of a minority administration could wag the dog for so long. This more historical and grounded approach would also rescue Davis’ account from the imputation he recognises of his social history being read as no more than ‘that of the middle-brow, sociologist interloper’ (4), or – worse – that of a journalist! This would be unfair to a professor of political communication who has published extensively on the media and on journalism and who with this book goes a long way towards explaining the extraordinary situation in which what Philomena Cunk calls ‘the United Britain of Great Kingdom’ now finds itself.