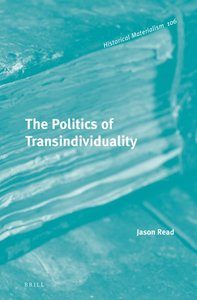 Jason Read
The Politics of Transindividuality

Social scientists, philosophers and political actors, amongst others, have been sharply divided over the status of the human subject.  Economists generally advocate methodological individualism, the concept that the human being is everything and the collective is nothing.  Economists have often argued that collective notions such as social class are constructs, and it is more realistic to consider the behaviour of individuals.  Other disciplines such as sociology have, in contrast, often stressed the collective nature of human existence; individuals are shaped by wide social forces.  Languages and states are examples of collective human projects that shape human existence; the individual often has little or no choice as to participating within them.  Transindividuality, the notion that human interactions make us what we are, cuts across this binary division, as neither the individual nor the collective are sovereign.  The interactions between individuals shape both subjects and societies.

In this text, Jason Read, who is both part of a network of new Althusser/ new Spinoza scholars, and a thoughtful observer of the post-autonomist Marxist approach of thinkers such as Antonio Negri, shows how transindividuality is a concept that follows from Marx’s thinkin, and is a Marxist concept.  The concept of transindividuality as a product of Marx’s thought has been most clearly articulated by Etienne Balibar.  In his The Philosophy of Marx, Balibar notes that the essence of the human species is, for Marx, described by the concept of ensemble.  Marx, Balibar observed, was careful to use the French term, showing how our interactions with others are productive and to some extent fluid rather than fixed.  From capitalist work to the ensemble of an orchestra, we create with others.  Marx’s project might be seen as one of replacing the cooperation needed to create profit in capitalism, with a free association of workers in a communist society.  While Marxism has often been seen as holistic and collectivist, and thereby reducing the individual to a cog in a common machine, Balibar has used the notion of transindividuality to challenge such notions.

Read’s objective is to show not only that transindividuality is a concept that can be found in Marx, but how it can be made into a concept for Marxists.  The approach, which might be consistent with diverse thinkers, including both Althusser and Deleuze, is that concepts can be produced and constructed in new ways to help create particular effects on social reality. Read aims to show how a notion of transindividuality has been produced, and how it can help Marxists and others dedicated to challenging neoliberal capitalism to promote an alternative kind of society.

I found The Politics of Transindividuality an enjoyable and thought-provoking text.  Read dedicates the book to the activists of Occupy Maine and Wall Street. While it is a serious philosophical text, it is extremely clearly written and relatively accessible to those of us who are engaged primarily in activism and lacking the skills of the philosopher, literary theorist or theologian.

The book focuses on a range of thinkers who have either explicitly or implicitly worked with the concept of transindividuality.  While I think an alternative approach, focusing primarily on concepts, might have been useful, Read is largely successful in outlining how different thinkers have made use of the concept and how in turn transindividuality can be used in the early 21st century by those of us active on the left.

Transindividuality was apparently first coined and used by the 20th century French thinker Gilbert Simondon.  Other recent authors who have put the concept at the centre of their work include Bernard Stiegler, Paolo Virno, and perhaps most significantly for Read’s argument, Yves Citton.  Read provides a concise and clear account of these contemporary transindividualists whose work has relatively rarely been translated into English and might otherwise be missed by non-French and Italian readers.

Simondon has, according to Read, examined the notion of transindividuality in encyclopaedic detail, noting that the creation of human individuality is a process; both nature and society produce the human individual. Simondon is also concerned with individuality as process within nature, for example, he examined how individual crystals are created.  Simondon seems perhaps haunted by a romantic view of transindividuality, drawing on Adorno and Hokheimer’s notion that in a consumerist capitalist society, the profit motive degrades our individuality, making us slaves to the commodity.  While critical of capitalism and placing the creation of a post-capitalist society at the centre of his critique, Read is sympathetic to those thinkers like Spinoza who reject the idea of some original unchanging human essence that can be restored to us with the demise of capitalism

Read notes that transindividuality is a constant of human existence; we are always interacting with others and creating new social realities.  Read also sees transindividuality as overdetermined. There is not one key act of interaction, such as religious observance or consumerism or work place activity, that can be isolated as primary and dominant.

While he finds use in all the thinkers discussed, and he rejects ‘a sterile opposition of true to false’ (page 18), he is most interested in how the concept can be used to promote social change and, amongst contemporary thinkers, both Frédéric Lordon and Yves Citton, seem especially significant in this regard.  A key concept is affect or emotion.  While economic concepts shape much of our society within a neoliberal framework, the reason that particular commodities are valued is a product of emotional and linked identity needs.  Marx noted that needs, beyond the pursuit of the barest survival, change.  Facets of our lives that we view as private, subjective and personal, including preferences and gestures, can be understood as products of historical forces and social interactions.

An identity that is disobedient to capitalism, identified by Lordon, creates the potential to destroy capitalism and perhaps create an alternative social and economic system.  Read notes that philosophy is closely linked to political action, the construction of our gestures, emotions and identities is a central part of revolutionary change.  While Laclau and Mouffe have identified the construction of narratives as a key part of a post-Marxist project to mobilise rebellion, Read poses the notion of a network of concepts that can be explored via transindividuality that provide a potentially more sophisticated and nuanced approach to mobilisation.

Thus, Read is seeking to show how transindividuality can be used to understand the particular conjuncture we are at in the early 21st century so that political interventions from the left can be made more effective.  Perhaps in a sense transindividuality is a concept central to Marx’s work that can be put to use for contemporary Leninists.  This ambition to use a concept to make an intervention is challenging.  As Read notes, to do so might lead to a text that is both too abstract to be productive but too contextually based to be intellectually defensible, ‘too abstract and too concrete…lacking in historical specificity, all at once.’ (page 10).

I found this a very satisfying text which, while taking some risks, is both intellectually strong and accessible to non-philosophers. Nonetheless some criticism can be made, and alternatives posed.  I would agree with Ted Stolze’s review that there is a danger of the text forgetting ecology.  As Read shows, Spinoza argued that we humans don’t live in a kingdom within a kingdom, by this he meant we are part of nature not separate from nature.  Attempts to green Marx’s thought are increasingly common and most of the thinkers discussed by Read can be seen as having an ecological dimension to their thought.  Stolze argues that transindividuality should be used to examine interactions between human individuals and the rest of nature; he notes that Read fails to develop a much need ‘deep Green Marxism’.  Thus, transindividuality needs to be used as a concept for ecosocialists and this requires productive intellectual and practical labour.

I agree with Stolze but this notion of post humanist transindividuality would require perhaps a book length discussion in addition to what Read has already written. In turn, I felt that book might have been even more accessible to those engaged in political activity who are not primarily academics by the inclusion of a glossary.  Equally a focus on the concept and related concepts such as affect, gesture, etc, might have been an alternative to focussing on individual authors.

Nonetheless this is a very productive text and will hopefully lead to both new texts and to more sophisticated approaches to political action.  Challenging Badiou’s notion that the event is everything, Read stresses that alternatives are always possible, transindividuality helps us to make interventions that can create something different.  While we are shaped by social forces, the future is far from determined and monolithic.

Every conjuncture, every historical moment is defined by different individuations, political and economic, as well as tensions between the different elements of these individuations, as affects, habits, gestures, and knowledges combine in different ways in each.  Politics is not a matter of waiting for some epochal event, or rupture, but is always taking place (even if disappointingly so) in the tensions and pressures that define every contestable articulation of individuations. (page 289)

There is much to explore here, a philosophical concept for Marxists now rather than a concept to be found within Marx, provides a strong basis for continuing investigation which will surely inspire practical political interventions.