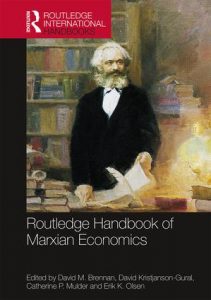 With a list price of $220, my first impulse in preparing a review of the Routledge Handbook of Marxian Economics was to embark on an ironic riff about the disconnect between price and value. I thought better of this once I had worked my way through this dense and, frankly, intimidating volume. Although Routledge absolutely should revisit its pricing policies and practices, this edited collection is likely of value to the scholar and the student alike. The book provides a rich set of thematically organized treatments of many of Marx’s most important conceptual contributions from overviews of labor power, value, and alienation, to the application of these concepts to the political economic categories and trends that characterize life and economics under the capitalism of today. The book offers a range of definitional and recalibrative entries set alongside a number of extensions and critical arguments on some of the most complex and contentious of Marxian theories.

The book is organized into five broad sections: the first two address Marx’s dialectic and method, the next two the productive process and economic systems, and the final newer streams of inquiry within Marxian theory. This format accommodates both cover-to-cover reading, and more selective topic-specific study. In this review, I take the latter approach, having selected a handful of representative chapters that should provide a sense of what the book offers, as the whole book is too lengthy and comprehensive to fully cover in such a short review.

As a whole, but with some exceptions, the collection tends to closely follow the theoretical contributions of the Amherst School of Marxian economics, and especially those of Richard Wolff and Stephen Resnick. This is an obvious point of connection between many of the volume’s contributors given Wolff and Resnick’s direct and relentless engagement with the struggle between Marxist and mainstream economic paradigms.

Appropriately, Wolff contributes an early chapter on class analysis. His contribution pushes beyond simple categorical models of class, and re-centers class analysis on its foundation in the production and distribution of surplus value. Such a conceptualization of class, according to Wolff, reaches beyond power-oriented models by demonstrating class’s materiality while simultaneously revealing the functions of productive and unproductive labour within its composition – that is as the producers and distributors of surplus. Such a model also recognizes the role of the bourgeoisie in such a productive and distributive relationship – that being not only as the owners of the means of production but as the beneficiaries of the surplus. Wolff is careful, of course, not to suggest that exploitation writ large is specific to capitalism, but that it simply takes on a different form through the imposition of the wage and the siphoning of surplus.

This is a thread that David M. Brennan also picks up in his chapter on the capitalist firm. For Brennan, in engaging in this model of class analysis we gain a particularly strong insight into the operation of capitalism at the level of firms and their structures, processes and tensions. Like Wolff, Brennan’s discussion probes the distinction between productive and unproductive as a way of better demonstrating the complex structure of class under capitalism. Here he takes us into productive and unproductive firms, arguing that the latter should be considered those enterprises that work to distribute the surplus generated by the former. Brennan’s chapter builds upon Wolff’s in its overview of the kinds of distribution that characterizes these firms; surplus must, for the enterprise to continue to function, be distributed both internally and externally, and it is Brennan’s contention, following Marx, that in understanding how this distribution functions we are in a better position to challenge its injustice and to formulate alternative models.

In Socialism and Communism, Theodore Burczak outlines potential alternative models of production, stepping beyond common conceptions of socialism and communism that ground themselves in property ownership. In line with the other chapters, he moves towards an understanding of both that depends on the alleviation of exploitation through just production and distribution of surplus. Such a shift would depend less on mechanisms like a universal basic income, and would require a massive overhaul in the way that production happens. Burczak sees one potential way of achieving this as worker self-directed enterprise – a common call within Amherstian Marxism. This would necessitate changes in both practice and in policy, as it would necessitate a move away from the dominant networks that reinforce exploitation. A movement toward a more directly worker based system of production and distribution could, according to Burczak, also be realized incrementally over time through a series of radical interventions, challenging the notion of a necessary “singular rupture” that will allow for the overthrow and replacement of capitalism.

Moreover, other contributors problematize the static class categories of mainstream Marxism. For instance, Satyananda Gabriel, in his chapter on productive self-employment, attempts to recover Marx’s concept of the ‘ancient mode of production’ in order to situate self-exploitation against the more common theoretical backdrop of formal industrial forms of exploitation. Self-employed producers, for Gabriel, are commonly relegated to the fringes of Marxian theory assumed to be historical vestiges rather than active participants in contemporary systems of accumulation. Far from being insignificant actors sitting on the sidelines of global history, however, Gabriel presents the self-employed producer as a critical player in the global economy, flexible workers that ease capital’s efforts to dismantle the working class through lower wages, regressive labour policy, and decentralized production.

After reading four sections dedicated to the review and refinement of rather classical strands of Marxian theory, the reader is likely to find the final section refreshing and thought provoking. This should not be read as a dismissal or even as a critique of the book or its editors, as the earlier sections provide excellent distillations of various concepts and streams of Marxian inquiry. However, the final section is particularly rich with refinements and realignments of Marxian theory, especially as this relates to feminist and environmental strands of theory and praxis. Drucilla K. Barker and Suzanne Bergeron’s Marxism, Feminism and the Household, and Brett Clark and Stefan B. Longo’s Marxism and Ecology were both timely contributions that propel the book into the contemporary political moment. The former, in its extension of the work of Silvia Federici, Selma James, and others, situates reproductive labour and social reproduction alongside the formation of movements for social change, while simultaneously revealing how such movements can pave the way toward more just forms of economic and social organization. The latter demonstrates the immediacy of such reorganizations as global value chains and mass consumption further mask the productive process while the relentless drive of accumulation jeopardizes life across the planet.

Of course, this brief review only skims the surface of a dense collection of conceptual portraits all of which serve as useful commentary to read alongside a dedicated study of Marx and Marxian economics. As a scholar I found myself compelled by the deep, exhaustive treatments of Marxian concepts; the accounts are rich, well argued, and generally quite illuminating. As a teacher, I found some of the more introductory and definitional contributions of particular utility in teaching the foundations of Marxian theory. The entries on abstract labor by Bruce Roberts, productive and unproductive labor by Erik K. Olsen, and alienation by Sean Sayers, have been of particular use in my Labour Studies courses. Students would also be likely to find instructive resources within this volume, though some contributions stand out as particularly theoretically and economically robust, and are likely better suited for the advanced reader of Marxian theory. Generally speaking, however, the book is a useful contribution to the field of Marxian economics, many of its chapters warranting consistent re-reading. It is a book that I have already used in my work and one that I am likely to continue using for the foreseeable future.