Marx & Philosophy Review of BooksReviews‘Encyclical on Climate Change and Inequality: On Care for our Common Home’ reviewed by Tom Angier 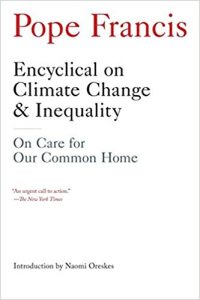 Pope Francis
Encyclical on Climate Change and Inequality: On Care for our Common Home

Tom Angier lectures in Philosophy at the University of Cape Town, and works on Moral Philosophy. He …

When a publication receives rave reviews from The Guardian, New York Times and Washington Post, one knows one is in for trouble. And so it proves with Pope Francis’ encyclical, Laudato Si’ (‘Praise Be!’ – though Melville House Publishing prefer the plodding title above). By turns sentimental, vague, and larded with UN-type jargon, it further entrenches Francis’ complaisance towards the class of opinion-forming bien pensants. The performance is thus only very dubiously Catholic; save chapters two and six, where he sequesters ‘religious’ material, the encyclical might be mistaken for a think tank position paper. Overall, I shall argue it is best understood in terms of a class analysis. For bar some passing criticisms of abortion (§§120, 136), the encyclical represents a thorough assimilation to the mindset of the transatlantic (though especially European) upper middle and ruling class.

At the core of this rambling document lies the thought that, somehow, everything is connected. We hear how ‘all creatures are connected’ (§42; cf. §220), about the ‘mysterious network of relations between things’ (§20; cf. §138), and even that ‘everything is interconnected’ (§70; cf. §§91, 117, 137, 142, 240). Because ‘God has joined us so closely to the world around us’, Francis avers, ‘we can feel the desertification of the soil almost as a physical ailment’ (§89). Such ‘ailments’ disturb the ‘sublime fraternity’ (§221) or ‘serene harmony’ (§225) with creation which we should – and Saint Francis supposedly did – embody. And Saint Francis’ namesake hence urges us toward a renewed ‘global solidarity’ (§240). This mélange of sentiment is perhaps best summed up as the unexceptionable, and indeed plausible view that when the earth is under threat, so are we. But Francis gives this view a particular spin, namely that when the earth is under threat, it is the poor who are worst affected. ‘Exposure to atmospheric pollutants produces a broad spectrum of health hazards’, we are told, ‘especially for the poor’ (§20); ‘the gravest effects of all attacks on the environment are suffered by the poorest’ (§48). Indeed, the ‘environment’ and ‘the poor’ form a kind of double-act in Francis’ mind, at times becoming almost conflated. He tells us that ‘the earth herself, burdened and laid waste, is among the most abandoned and maltreated of our poor’ (§2).

So far, so well-meaning. Granted, the style is orotund, and the relation between environmental ‘degradation’ and the condition of the poor perhaps overdrawn. But isn’t this irrelevant, given the gravity of the situation Francis highlights? I’m not so sure. For what Francis’ elision between the environment and the poor occludes is that safeguarding the environment and bettering the condition of the poor are often in tension. There is no mention in this encyclical of how industrialisation in China, for instance, has vastly improved the lives of its poorer citizens. And hence there is no real facing up to the fact that there may be inescapable trade-offs between care for the earth – where this means simply ‘preserving’ it – and care for the poor. Francis speaks airily of ‘economic ecology’ (§141), and assures us that ‘Strategies for a solution demand an integrated approach to combatting poverty, restoring dignity to the excluded, and at the same time protecting nature’ (§139). But how often are these jointly realisable? Francis does acknowledge the risk that ‘Imposing [environmental] measures penalises those countries most in need of development’ (§170), and suggests that ‘the time has come to accept decreased growth in some parts of the world, in order to provide the resources for other places to experience healthy growth’ (§193). But not only is the inference here (‘in order to’) purely gestural and unargued, the whole tenor of the encyclical – which casts ‘nature’ as inviolable and sacrosanct – seems to preclude the notion of reasonable and warranted trade-offs.

This tension between environmentalism and economic development is, as we know by now, hardly fictional. In Oregon, for instance, fishing and lumberjacking have been severely, if not wholly curtailed by environmental legislation. And this reflects a second, related tension within Francis’ rather hazy Weltanschauung: between ‘small is beautiful’ on the one hand, and his penchant for international action on the other. The former is evident at several points. He lauds ‘cooperatives of small producers’, for example, which ‘adopt less polluting means of production, and opt for a non-consumerist model of life’ (§112); these ‘exploit renewable sources of energy which ensure local self-sufficiency and even the sale of surplus energy’ (§179). Elsewhere, Francis hymns the ‘local economy’, and counsels that the ‘local population should have a special place at the table’ (§183). But this somewhat inchoate favouring of the ‘local’ – which he shares with Alasdair MacIntyre’s latest book (2016, esp. §§2.6, 4.3; reviewed here) – sits alongside a very sanguine attitude toward international environmental legislation and initiatives. We hear, for instance, that ‘What is needed … is an agreement on systems of governance for the whole range of so-called “global commons”’ (§174); ‘it is essential to devise stronger and more efficiently organised international institutions’ (§175). Indeed, there is apparently ‘urgent need’, at least vis-à-vis environmental issues, ‘of a true world political authority’ (§175).

Now strictly there is no contradiction between local action and national or supranational bodies with ‘teeth’: for such bodies can make room for, and even encourage the former. But in practice, they tend to turn what were options – contingent on local needs and possibilities of manoeuvre – into requirements backed by sanctions. This is something Francis does not shy away from. Governments, he asserts, must ‘develop more rigorous regulations, procedures and controls’ (§179); ‘Enforceable international agreements are urgently needed, since local authorities are not always capable of effective intervention … Global regulatory norms are needed to impose obligations and prevent unacceptable actions’ (§173). Indeed, Francis strikes a rather ominous note when he suggests that local action on the environment is merely faute de mieux: ‘while the existing world order proves powerless to assume its responsibilities’, he judges, ‘local individuals and groups can make a real difference’ (§179). Here the ‘local’ appears decidedly second best, an unreliable arena of piecemeal decision-making, insufficiently heedful of the ‘experts’. But this casts doubt, in turn, on Francis’ repeated denunciation of what he calls the ‘technocratic paradigm’ (chapter 3, part II). Whereas he is full of vituperation against the ‘financial system’ (§189), with its supposedly ‘instrumental reasoning’ (§195) and insouciant embrace of ‘our technological culture’ (§112), he is strikingly insouciant himself when it comes to the organs of state and of international political authority.

This trust in politically-enforced environmentalism – especially at the international level – sits uneasily, therefore, with Francis’ professed localism and anti-technocratic ethos. But it is also apparent in a third tension: viz. that between environmental consciousness and what the Pope calls ‘human ecology’ (§148). At §196, he claims that ‘The mindset which leaves no room for sincere concern for the environment is the same mindset which lacks concern for the inclusion of the most vulnerable members of society’. From this he infers, implicitly, that the mindset that has sincere concern for the environment is the same as that which has concern for the inclusion of the most vulnerable. But not only is this inference fallacious, the conclusion drawn is false. For if we include among the ‘most vulnerable’ – as Francis certainly would – unborn children, children coping with divorced parents, children of ‘non-traditional’ families, etc., then the environmentalist mindset is simply a useless predictor of concern for their ‘inclusion’. Indeed, one might hazard that it is a good predictor of concern for their exclusion: for environmentalists are generally among the least concerned to uphold norms against abortion, divorce and new forms of family structure. Of course, Francis could protest that practising the ‘ecological virtues’ (§88) and upholding traditional Catholic sexual and family ethics both form part of a ‘seamless garment’ (§9). But this encyclical seems blind to the radically torn garment we face in fact.

In sum, Francis’ proposal of an ‘integral ecology’ (§124), comprising both nature’s and humanity’s good, is long on rhetoric and short on coherent argument. He papers over deep fissures between environmentalism and the betterment of the poor, between international and local initiative and control, and between environmentalists’ and Catholics’ respective conceptions of the ‘most vulnerable’. True, this encyclical is intended to show that an ‘ecological spirituality’ (§216) lies close to the centre of the Catholic tradition. But the evidence is thin – to say the least. Within that tradition there is, to be sure, great concern for the poor, an espousal of the principle of ‘subsidiarity’ – viz. that functions which local institutions perform effectively belong more properly to them than to dominant, central institutions – and furthermore a constant refrain of protecting the vulnerable. But Francis’ rhetoric does nothing to show that contemporary environmentalism is consistent with these values and claims. All of which raises the question: why is he so keen to yoke the Catholic Church to its agendas and priorities?

The answer lies, I believe, in Francis’ desire for a rapprochement between the Church and the Western intelligentsia. For notwithstanding his avowed positions on abortion, same-sex marriage and transgenderism, his instinctive sympathies are with what Elizabeth Currid-Halkett (2017) calls the ‘aspirational class’. They too, despite their relative wealth, are keen to distance themselves from the purportedly damaging habits of ‘consumerism’ – a pejorative term which litters Francis’ encyclical. And they too, despite their urban lifestyles and love of international travel, tend to be devotees of the environment (see, for example, Fred Siegel (2015 – esp. chapter 12 on ‘gentry liberalism’). The irony is, then, that although he trumpets his love for the poor, Francis’ actual ‘mindset’ is wholly divorced from theirs: viz. one that tends to want to spend more, and to enjoy not unspoiled nature or a lifestyle of ‘simplicity’ (§222), but rather the benefits of urban life and material plenty. Indeed, Francis thereby shows exactly the kind of fraught sensibility which Rachel Sherman (2017) describes in Uneasy Street: The Anxieties of Affluence. He is, in effect, a denizen of the class of globalised, well-off city-dwellers, who wishes he weren’t one. And like the rest of his class, when it comes to the poor, he seems to know and to understand little.