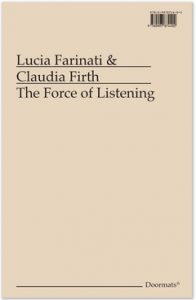 Lucia Farinati and Claudia Firth
The Force of Listening

There is a lot of talk on the left – grassroots politics demands a lot of meetings – but it is less clear that there is an equal amount of listening. This innovative book invites us to think about listening and consider that ‘while there is a significant literature on the role of speech and voice in the political arena, very little seems to have been written on listening’ (9); though the authors do note and have been inspired by the exceptional and important work in this area by Gayatri Spivak and Sara Ahmed, as well as by Susan Bickford and the radical pedagogue Paulo Freire (amongst others). At the beginning of the text, they are clear to specify that it is ‘not just any listening’ (9) that they have in mind but listening understood ‘primarily as a practice’ (10). Simply hearing someone say something is typically a passive mode of engagement (often accompanied by formulating one’s ‘response’ in one’s head without really gauging what is being said), whereas listening requires active intent and commitment that one must work at in order for it to be sustained. Farinati and Firth are particularly concerned, therefore, with how listening can be conceived as a form of activity that has the potential to be used as a political tool capable of bringing about ‘wider social and political change’ (10). Two important domains within the left that have paid some attention to the practice of listening are feminism and contemporary socially-engaged art practice and it is one of the hallmarks of the originality of this book that the authors have brought insights from these areas into the heart of their framing of the practice of listening. This also explains some of the stylistic novelty of the text.

Although authored by Farinati and Firth, this book is ‘a montage of conversations’ (10) edited together into the creation of a new textual and political space where the potential for the exchange of ‘experiences, acts and practices of listening’ (15) is put centre stage. While many books bring together conversations, interviews and discussions between their covers, this one actively montages these elements together with a view to unsettling the traditional dynamics of such formats in the name of an active practice of listening that must be distinguished from simple hearing. Art and politics converge in the construction of their montage such that this book sits rather provocatively between these domains: it is not a book about art but it is also not an art book; it is not a book about politics but it is also not call to political arms. It is none of these things and yet has elements of each; this stylistic novelty is one of its great strengths.

The conversations that form the basis of this innovative montage into the practice of listening involved media theorist Nick Couldry, philosopher Adriana Cavarero, members of the sound collective Ultra-red, the activist group Precarious Workers Brigade, artists Ayreen Anastas and Rene Gabri, as well as two important figures from feminist consciousness-raising groups, the anthropologist Pat Caplan and artist Anna Sherbany. It is a carefully chosen group that spans decades of activist experience, that embodies many of the intersections of art and politics, and that brings theory and practice into the productive relay that Foucault and Deleuze in their own conversation, ‘Intellectuals and Power’, envisaged as a counterpoint to the hierarchical and totalizing tendencies within the democratic and more militant left to place either theory or practice first within progressive political practice. Continuing this theme, the montage created by Farinati and Firth neatly expresses the sentiment behind Deleuze’s comment to Foucault that he ‘taught us the indignity of speaking on behalf of others’ and it does so in a way that invites us to consider the dignity of the practice of listening carefully, actively and intently, to what others have to say. Indeed, just as montage emerged as an art form in the revolutionary fervor of Soviet film-making and the ruins of a world at war in the early twentieth century with the aim of finding new ways of expressing hope and human freedom, so listening, understood as not just a passive form of auditory reception, is the active process of creating new meanings, new political spaces and potentials, from out of the often overused, stale and decaying elements of traditional conversation and dialogue. True to their task, therefore, Farinati and Firth have constructed a book that conveys its message in its very form and not just in its conceptual content.

After some important preliminary material that establishes the rationale behind the form, content and title of the book, it is structured into eight short chapters, each of which tackles philosophical, institutional, activist and ethical aspects of listening by weaving together the experiences of the conversationalists. We find rich and provocative insights on each step of the journey through these chapters: discussion of how active listening can forge group identity (chapter 1); how listening in feminist consciousness raising groups helped women articulate the problems they faced (and still face) in a world saturated in masculine discursive strategies (chapter 2); what the relationship is between speaking and listening (chapter 3); the ways in which active listening can be understood as a collective practice that helps avoid the homogenizing effects of collective discussion (chapter 4); the difficulties of carving out a space for practices of listening in institutional settings such as art galleries and traditional political organizations but also the potentials for new institutional formations that can emerge when listening is practiced in earnest (chapter 5); some of the ethical concerns that arise when listening is given equal footing to speaking, in particular the questions of care and responsibility that get raised (chapter 6); insights into the idea of listening as a form of affective labour that may, at its best, forge bonds of solidarity (chapter 7); and, how many of these conceptual and practical issues were activated, negotiated, problematized and addressed in the Occupy movement (chapter 8). The overall effect of this journey through the practices of listening is profound. As one of the members of Ultra-red puts it, the tendency of leftist intellectuals to speak but not listen is the very ‘condition of the intellectual patron’ and in that sense such patrons simply reinforce the conventions of the political rather than challenge them (177). In the place of the patron who sweeps in and pronounces, the authors see the risky business of listening as precisely that which can help foster change amongst all participants in intellectual life, art and activism that can ‘create a passage or bridge that we need to construct through acts of exchange’ (22).

There is no doubt that this is a powerful vision and a much needed corrective to the tendency within the left to prioritize speaking over listening. Part of the power of this book, however, is that it also raises questions that connect to a broader social, economic and political trajectory; namely, the increasingly aggressive culture wars around free speech. It seems that there is real potential to tackle this fractious arena by bringing the complexities of practices of listening into the debates and I could not help but wonder if this is an area where the authors and the conversationalists feel they could take this work. Uniting as it does elements of the libertarian right and left, the contemporary defenders of free speech seem both deeply committed to the free market of speech and yet deaf to the very idea of listening. It may be that there is another montage to be created that could directly address this topic. If it could be done with the subtlety and refinement of this volume then it may be that Farinati and Firth could bring their creative practice to bear not just on the democratic left but on the culture wars around free speech that are increasingly defining the battle lines on campuses, in workplaces and in political organizations.

As it stands, this little book is big in ideas, rich in practical insights and effective in conveying the intersections of creative practices and resistant acts both within and beyond traditional social and political formations. Before any of us get up to speak at a meeting, a rally, a public gathering, a protest or even in front of a politely suited-and-booted audience in a gallery, it would be a good idea to read and re-read this book in order to reflect on the force of listening and the critical potential it contains.