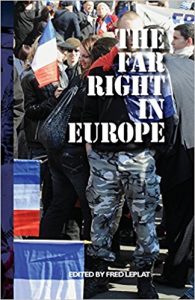 This book, The Far Right in Europe, is a recent collection of socialist essays which deal with the rising threat of Fascism and Fascist Parties in Europe today. A threat made more pressing by the resurgence of several Fascist parties since the current crisis of Capitalism began in 2008 and since the political turns of 2014-2016. It is required reading for all socialists interested in the dynamics of Fascism and Fascist Parties in Europe today. The book’s thesis is simple: Fascism, as the most reactionary form of Capitalist society, retains its threat today.

The book, edited by Fred Leplat, is divided into several chapters by several authors on individual Fascist and Right-Populist parties in Europe today, alongside an individual essay on the overall European Far-Right by Michael Löwy and an Introduction by Manuel Kellner. The book, from a broadly Trotskyist perspective, provides a contemporary socialist overview of Fascist politics and Fascist parties in Europe today.

The book brings together several essays, which together provide effective political coverage of today’s Fascist Parties. While the book is far from a developed analysis of Fascism in Europe today, it presents an effective overview of most of the important Fascist and Right-Populist Parties operating in Europe – from Front National to Ataka, from Fascism in Italy to the Right-Populist movements in the Netherlands. Individually each essay is an effective overview of the Far Right in various national contexts – from France to Great Britain, from Italy to Hungary. What brings these essays together is the short essay by Löwy. Löwy’s ‘Ten Theses on the Far-Right in Europe’ is a concise overview of the progress that the Fascist parties and the Right-Populist parties in Europe have made since 2008. Together the essays combine to become among the best left discussions of the Far Right in Europe to have appeared since the capitalist crisis of 2008.

The book itself is a very good introduction to the contemporary dynamics of the Fascist and Far Right parties in Europe and their connections with each other. It will especially serve those readers who have been raised on a diet of only historical analyses of historical Fascism, who lack a solid overview of contemporary Fascism and Fascist Parties in Europe, and especially those of Eastern Europe. While the book lacks specific chapters on several important contemporary far right organisations in Europe (particularly Golden Dawn in Greece, AfD and NPD in Germany, the BNP and EDL in Britain, and the FPO in Austria) it serves as a basic primer on both Fascism and Far Right activity in Europe. While the book, itself, is cautious to avoid providing an overall analysis of all Fascist parties and activities in Europe (with the exception of Löwy’s own excellent essay) the individual essays do enough to provide an overview of both Fascism and Fascist Parties in Europe today. This is particularly well-done in the case of the essays on the Fascist parties of France, Hungary and Bulgaria, and of the detailed analysis of Swedish Fascism since the Second World War. Connected to this is the correct attempt to link each of these parties – especially in the essays on France and Sweden – to the Fascist threat of the 1930s and 1940s, specifically their historical continuities, their class basis, and their ideologies. The book also provides part of that much needed and wider political work for a contemporary Left analysis of Fascism, in providing information and analysis of several Fascist or reactionary Populist parties in Europe today. In trying historical times and political times, such as our current period of crisis and disorder, there has long been a decisive need for  socialists and the wider left to again understand and politically respond to Fascism as a political force; as was not the case for most of Europe’s postwar history. In this regard, the book’s conclusion is simple: for the contemporary left in Europe the need to confront fascism and fascist parties is again a pressing and important political issue.

The stand-out is the short theoretical essay by Löwy on the nature of the current far right offensives and their connections to political conditions in Europe both past and present. Löwy’s ‘Ten Theses on the Far-Right in Europe’ is a powerful essay. Löwy’s overall essay on the European Far-Right and its offensives, today, has many interesting things to say, both theoretically and practically, about the links between currently existing capitalism (and its crisis) and the resurgence of the Far-Right. His lingering contribution has been to apply the standard Marxist theory of Fascism to our present circumstances today, and to argue the need for an effective Left response to Fascism. Alongside this, via his own reading of Trotsky’s theory of Fascism, Löwy has been correct to stress the politics of Fascism and anti-Fascism in confronting Fascism today. He also makes the key point that the Left cannot afford to treat Fascism as simply a national phenomenon – but rather one which must be confronted across countries and continents, in various forms. Confronting Fascism will thus require an international movement and an international struggle – just as during the 1930s and 1940s. Such a broad contribution in such a short essay is vital for the left today, and greatly appreciated. As the stand-out of the collection, Löwy’s essay is an excellent contribution to Socialist thinking on the nature and reality of contemporary Fascist ideology and its connected movements/parties in Europe.

The book also describes some of the more difficult problems in Socialist responses to Fascism as it currently has re-emerged in Europe since the 1990s and specifically since the capitalist crisis of 2008. Löwy in particular is correct when he suggests, in his ‘ten theses’, that treating Fascism as simply a historical phenomenon would be a grave mistake – given the existence of several mass Fascist parties today. Löwy is also correct when he suggests that the Left has to re-develop its analysis of Fascism in light of political developments since 2008, one consistent with the political results produced by the general crisis of Capitalism today. Ultimately the correct response to Fascism is a political response – requiring a serious Left and Socialist politics.

Fascism is operating, unbound, again in several parts of Europe, and elsewhere; as a new, mass and ultra-reactionary movement; if not one yet in government. This is alongside several right-wing turns by the established Centre-Right parties, in general, in Europe and elsewhere, in Poland, Ukraine and the United States, since 2014-2016, if not Fascist ones there yet. In general this trend has tended to support the traditional parties of the Right in Europe and the United States – and a major Fascist offensive is thus unlikely today, though the Fascist threat remains because of the crisis of Capitalism. This is of particular concern for the Left and for Socialist forces in several countries, not simply in Europe. The current crises of Capitalism, and the problems of the Left, today, are no safe guarantees Fascism will not achieve further results in the present and future, or even state-power at some point in some counties (particularly in Ukraine and other parts of Eastern Europe). It is the task of the Left and of Socialism to defeat that threat; and to bind Fascism once again in its defeat. What distinguishes this current book is that it provides much of the information necessary to help provide an analysis of where these current Fascist parties and organisations have emerged from since the twentieth-century defeat of Fascism and what they intend to do in the event that power is gifted or granted to them in the foreseeable political future. One may wish to argue with this or that aspect of the analysis of any of the book’s chapters about today’s Fascist threat – that is inevitable. Yet the book is vital, as is, to providing the Left with the political tools of knowing and defeating its worst opponents operating in Europe today – the Fascists and the other sections of the far-right.

Fascism is a threat today. Yet political comparisons of the recent right turns in the United States and Western Europe to Fascism, from Brexit to Trumpism, are perhaps overblown, and are indeed overblown, as neither Brexit nor Trump are harbingers of Fascism, as none of these Right turns have been strict Fascist movements. However such analysis of Brexit and Trump also ignores the major Fascist threat which does exists today – in the form of several major Fascist parties in Europe and elsewhere. Such analysis also ignores the realities of several recent Fascist and far-Right offensives; particularly in Central Europe and Eastern Europe. These parties are not likely to gain power or state power but their existing power is already a threat – both to the Left and to the worker’s movement. Fascism remains a deadly political threat in Europe today, especially in Central and Eastern Europe. Fascism, unbound, is a threat which must be understood and confronted. Fascism, bound or unbound, is always a threat to the Left. This book helps in the effort to confront it.