Marx & Philosophy Review of BooksReviews‘The Writing on the Wall: On the Decomposition of Capitalism and its Critics’ reviewed by Daniel Fraser 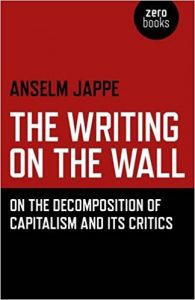 Anselm Jappe
The Writing on the Wall: On the Decomposition of Capitalism and its Critics

This collection of Anselm Jappe’s essays, subtitled ‘On the Decomposition of Capitalism and its Critics’, gathers together ten of the author’s essays written between 2007 and 2010. Jappe’s work forms part of the ‘critique of value’ [Wertkritik], or value-critique, current of heterodox Marxism that largely grew out of the German-language journals Krisis and Exit!, and which includes among its principle figures Robert Kurz, Norbert Trenkle, and Roswitha Scholz. Across the Atlantic, the group is closely associated with, and influenced by, the thought of Moishe Postone. Value-critique views itself as taking part in the resumption of the critique of political economy, identifying as its theoretical precursors the work, in particular, of writers associated with the Frankfurt School, such as Adorno, Horkeheimer, Benjamin, Lukács et al (18).

Value-critique, in seeking to distance itself from ‘traditional Marxism’ and the revolutionary movements or projects for the emancipation of workers that have called themselves Marxist, posits a separation between an “exoteric” and an “esoteric” Marx. The former is identified with Marx the political revolutionary, the thinker of class struggle, championing the development of the productive forces seeking to ignite the worker’s movement. The latter is taken to be the more fundamental Marx, the one whose critique of the categories of political economy, largely developed in the first three chapters of the first volume of Capital, is capable of theorising the absolute end of the capitalist mode of production. It is this effort at articulating the possibility of a ‘categorical break’ with all capital’s modes of socialisation (6) with which value-critique concerns itself.

The exoteric Marx that formed the basis of orthodox Marxism, and constituted the driving force behind the major revolutionary socialist movements of the twentieth century, is obsolete when faced with contemporary capital. Gone are the possibilities of realising socialism through left-wing democratic political parties, trade unions, or ‘national liberation movements (25), if indeed they ever existed in the first place. These bodies have revealed themselves as nothing other than the left-wing of capitalism and as therefore incapable of enacting any substantial break with its forms of existence.

Central to Jappe’s work in expounding his critical theory, and to value-critique more widely, is the notion of crisis: value-critique is, as Norbert Trenkle puts it, ‘in essence a theory of crisis’. In this context, this amounts to the argument that, from the 1970s onwards, the capitalist mode of production has reached the historical limits of its potential for expansion, and now finds itself in a downward spiral that is nothing less than the decomposition of the capitalist system itself. For Jappe and the other theorists of value-critique, this downward spiral is as a result of the internal logic of capital and the contradictory nature of its basic categories: value, abstract labour, commodities and money. The clearest indication that this crisis of accumulation inscribed within capital’s own contradictory logic is evidenced by the increasing superfluity of human labour to production (40), impending environmental devastation as a result of capital’s incessant drive for valorisation, and the destruction of the ‘symbolic and psychological foundations of human culture’ (38). Though the essays collected here take the form of discrete interventions in the context of (largely) French politics at the time of writing, interventions that Jappe uses to deploy and elucidate the central tenets of value-critique in a variety of contexts, they are unified by this conception of crisis and the implications for critical theory and for any possible political activity that this crisis precipitates.

The categorical break with capitalist modes of social being advanced by the critique of value theorists disavows a cornerstone of ‘vulgar historical materialism’: namely, the claim that human productive development contains any ‘tendency towards communism’ or teleological progress toward emancipation. However, as a theory of crisis, value-critique does retain a one-sided teleology or negative teleology: the assertion that the end of capitalist civilisation, its collapse, is the result of its own dynamic destructive logic and the inherent contradictions within its modes of social existence. Capital, then, ‘does more harm to itself than all its enemies put together’ (26).

Part of this movement in the critique of value entails the supplanting of the ‘subject of history’, by the ‘automatic subject’, which, Marx attests, value is transformed into via the process of accumulation (68). The struggles between capital and labour are defined as wholly internal to capital; the location of a potential radical break with capital this needs to be be searched for elsewhere. Capital is assigned as the Subject and class antagonism is jettisoned from the critique of political economy. The struggles for the surplus value created by the expenditure of labour-power to be ‘fairly’ redistributed among those who created it, for better pay and conditions, are struggles that can never challenge the continued existence of the capitalist mode of production. This is because they remain within the confines of the fetishised forms of capitalist sociality (money, commodity etc.). Value-critique seeks to advance the liberation from labour in Marx’s work, not the liberation of labour that defined traditional Marxism (86).

Jappe thereby rejects the ‘valorisation of the subject’ pervasive in traditional Marxism, and the quest for the revolutionary subject that accompanied it (19), arguing instead that it is only through the self-abolition of our current modes of subjective existence that capital can be overcome. This is the basis for Jappe’s dismissal of conceptual frameworks, such as Hardt and Negri’s ‘multitude’, which emphatically affirm subjects ‘in their empirical and immediate existence’ (21).

The texts in The Writing on the Wall are organised into three parts: pars destruens, pars construens, and pars ludens, the first two being the destructive and constructive nomenclature for theoretical argumentation, and the last, which contains the texts on art, denoting the playing of a part or acting. After the first section, which largely deals with the elements outlined above, the second investigates potential forms of practice or alignments that may be productive in ‘thinking beyond’ capital, beginning with MAUSS and the concept of the gift, before turning to Jean-Claude Michéa and moral reform (through ‘common decency’), the notion of degrowth, and the reclamation of utopia. In each case, the currents of thought Jappe analyses seek to expound alternatives to the ‘economism’ shared by both capital and Marxian anthropology alike, though each are found to be lacking, due to their dismissal of the critique of political economy as part of this rejection of economism (112).

Most extensive among these is the examination of the gift. Jappe identifies a shared assertion between value-critique and gift theory: that the accumulation of value can only take places as a result of many aspects of contemporary society that are not based on exchange. In other words, the function of value as value relies on processes that are themselves excluded from valorisation such as social reproduction performed by family, housework and so on (94). However, where the gift theorists see a potential mobilisation point for a non-commodity society in these processes, Jappe argues that this ‘dark side of value’, which enables it to subsist, bears its marks; that a gift society cannot be instantiated without the radical dissolution of the categories of capitalist domination.

Despite the coherence and usefulness of Jappe’s value-critique in exposing the limitations of orthodox Marxism and its radical and thoroughgoing critical methodology, there are inherent weaknesses to its mode of analysis. In particular, the displacement of class antagonism from the core of Marxian critique through the exoteric/esoteric distinction, is misguided, and relies on a misconstrual of class as a surface phenomenon rather than as a fundamental expression of the material activity by which the fetishised forms of capitalism are themselves formed. Capitalism is a system of production where the pervasive and most basic social relation is the capital-labour relation. This relation is a class relation. The creation of surplus value entails the reproduction of this relation that is the presupposition on which capitalist accumulation is predicated. That is, the fetishised modes of sociality that exist in capitalism are, at their most fundamental level, inscribed with the capital-labour relation: value and class are mutually implicated.

Closely related to this issue is the assertion of capital as Subject. Jappe argues that the systemic contradictions of capital are not between capital and labour, because labour is immanent to capital, which establishes, through relating to itself as ‘automatic subject’, the objective framework through which class struggles subsist. Class is reduced here to an objective mediating function in the reproduction of the more primary capital relation. This position risks replicating the fetishism that value-critique sets itself against by ignoring the human social content that underlies the categories of political economy. This content does not merely take place within the abstract social forms that structure it, but is rather constitutive of those social forms. As Marx explicitly states, the externalised fetish-forms of social existence conceal the fact that they are products of a social relation, not the product of a mere thing.

Overall, The Writing on the Wall serves as an excellent introduction to the central claims of value-critique and, despite the underlying negativity and pessimism of its positions, gestures towards potential activity that can, if not enact the categorical break with the capitalist mode of production required for socialism, at least be thought in tandem with, and as a complimentary to, the critique of value. In addition, value-critique as a body of thought is a valuable tool in the necessary critique of orthodox Marxism, and the distancing of any contemporary notion of communism from the outmoded and theoretically compromised teleology of vulgar historical materialism. It asserts that any understanding of socialism/communism must move away from the triumph of the working class towards the abolition of existing modes of subjectivity; that one must recognise that capital has a ‘left wing’, in which struggles for the redistribution of wealth occur without challenging the reproduction of the system itself; and that any adherence to teleological progress must be abandoned. These assertions are to be welcomed. However, problems for both Jappe’s work and value-critique more generally, remain; irrespective of whether or not one accepts that the contemporary crisis of accumulation is ‘final’ and that the capitalist mode of production is indeed in the process of decomposition.