Marx & Philosophy Review of BooksReviews‘Marx at 2020: After the Crisis’ reviewed by Jurriaan Bendien 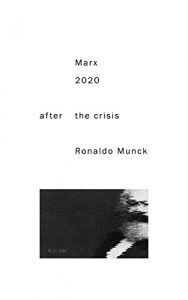 Ronaldo Munck
Marx at 2020: After the Crisis

A decade after the Wende, sociologist Ronaldo Munck reappraised the viability of Marxism in his book Marx@2000: late Marxist perspectives. For most intellectuals at the time, the matter was simple; Marx and Marxism were dead, and had no future. Autopsies were a waste of time. However, Munck gave Marxism the benefit of the doubt. His revised and expanded 2016 version of the book, retitled Marx 2020: after the crisis, is much more optimistic. Munck now feels vindicated in his millennial vision of Marx@2000, and thinks 2020 will confirm it. His message is that although Marxism is not the only progressive movement there is, it resonates with capitalism and working life, and that is why it persists. Marxism can revive in the future – provided it is reconstructed. A new intellectual synthesis can be crafted by integrating Marxist theory with important insights from feminism, queer theory, ecological science, post-colonial literatures, Karl Polanyi and various contemporary left-wing thinkers.

Educated in Buenos Aires, Munck (b. 1951) finished his Phd at University of Essex under Ernesto Laclau in 1976. He taught at universities in Northern Ireland and South Africa, at a time when major political battles were occurring. From there, he moved on to university posts in Dublin, Halifax, Buenos Aires and Liverpool. He has authored or edited some 30 books and 100 articles. In Marx 2020, he hastens to say though that he ‘is not a Marxist’ these days (p. vi). The tribute in Marx@2000 to Ernest Mandel’s Late Capitalism, as well as the spectre of a ‘post(modern) Marxism’, have vanished in Marx 2020. Many headings are changed; and the text as a whole gets a new slant and polish.

Why publish more about Marxism, if you are no longer a Marxist yourself? Munck (now at retirement age) answers that Marx’s ideas have ‘increased relevance’ in an epoch of ‘global turbulence’ (p. vi). The global financial crisis of 2007/2009, discussed in a new final chapter, discredited capitalism again. After his fall from grace in the Wende, Marx unexpectedly went back to the top of the charts; unions, left-wing groups and other ‘counter-movements’ are reviving or growing, and in the ‘post-truth society’, post-modernist theory itself hits a ceiling. Marx’s theory has to be ‘rediscovered’ in a new way, and realized through new experiences of critical dialogue, debate and struggle – a process that must go well beyond academia.

In 2015, Munck commented: ‘It would be fair to say what has mainly influenced my thinking has been the politics of the real world, and not academic debates.’ He suggests, à la Max Weber or Richard Rorty, that whereas you can grasp the ‘essence’ or ‘logic’ of concepts, labels and theories (he does try to do that, as a scholar), you can never grasp the true ‘essence’ or the ‘laws’ of the social realities they portray, because the social realities are too complex and transient, and they transcend all the concepts, labels and theories there are (or maybe there just is no essence or law, anyway). Things happen, contingently, all one can really do is experience them and choose one’s own response to them, using the languages and signs available at the time.

In his interesting critique, Munck does not claim to engage with ‘the very complex history of Marxism since Marx’, except ‘in a somewhat stylized way’ (p. viii). He agrees with Immanuel Wallerstein and André Tosel that ‘a thousand [different] Marxisms’ have sprouted from the social crisis of the neoliberal world (dis-)order. He thinks that some of those Marxisms will provide solutions for creating a better world (p. ix). His present concern is with which Marxist ideas from the past should be retained, abandoned or changed, for the sake of a credible and viable praxis in the future.

So Marx 2020 is presented from a ‘post-Marxist’ position which, however, could still transform into a new ‘Marxism 2.1’. In preparation, the book tours the reader through a selection of modern literature on Marxist theory, dealing thematically with history, ecology, development theory, the working class, feminism, culture, nationalism, religion, the economic crisis and the future of Marxism. It’s up to the new generation to connect the dots.

Leaving aside the subplots, I noticed four ‘main’ storylines structuring the narrative: the formation of Marxism as a creed, the global impact of Marxism-Leninism, the crisis of Marxism, and the issue of what is to be done. Marx, Munck emphasizes, never was a messiah or a prophet. His work was fallible, limited and unfinished. Any kind of ‘Marxist messianism’ or quasi-religious faith is misplaced, and alien to what Marx stood for. Marx’s enduring legacy is his analysis of capitalism and class struggle. Engels was a separate thinker who simplified, straightened out and sometimes distorted Marx, and who promulgated the doctrine of ‘scientific socialism’. It was Kautsky who systematized a doctrinal orthodoxy of ‘Marxism’, while Bernstein tried to scrap part of Marx, for the sake of a more flexible reformist alternative. From the 1930s onward, though, most social-democratic reformists dropped Marx altogether and adopted Keynesian economics. From the 1980s, they were increasingly captured by neoliberal ideology.

In Russia, Lenin’s leadership until 1924 had combined a fierce Marxist doctrinal orthodoxy with a flexible revolutionary realpolitik, yet his Marxist-Leninist heirs created a totalitarian bureaucratic system to force through their modernization program – under the banner of a Marxist-Leninist ideology (a ‘state religion’) which was promoted globally, and which included: (1) a misguided theory of productive force determinism (also applied to foreign policy, women, development theory and even world history); (2) the abandonment of progressive environment policies, causing vast ecological destruction and environmental despoliation; (3) seriously flawed understandings of the (neo-) colonial world, nationalism, and national liberation movements; (4) an ideology of ‘socialist realism’ as a system of bureaucratic control over art and culture by the state; and (5) heavy-handed repression of religion and religious minorities, with a militant atheism bereft of humane understanding.

Eventually, Marxism-Leninism degenerated into intellectual sclerosis and reactionary politics, prompting the crisis of Marxism in the West from 1968 onward. It was, according to Munck, primarily the cultural critiques of Gramsci, Foucault and Derrida, rather than Trotskyism, that struck a bridge between the ‘older’ Marxisms and the ‘new’ ones. The intellectual crisis of Marxist theory deepened into postmodernist deconstruction, elusive utopianism and disintegration during the 1980s and 1990s. The original environmentalist revolt of the New Left was absorbed into a ‘sustainable development’ movement, as if capitalism is sustainable. Working-class struggles against austerity failed, and petered out. André Gorz bode ‘farewell to the working class’. Post-Marxists like Ernesto Laclau & Chantal Mouffe concluded that all that was left was Marx’s ghost and a plurality of social struggles, which were very difficult to unite. The New Left never got beyond the tripod theory of multiple oppressions by ‘race, class and gender’.

Reconstructing Marxism, Munck argues, means: (1) abandoning old Marxist doctrines about the ‘woman question’ and developing a vastly better, modern understanding of gender issues and sexuality, as a condition for progress; (2) developing a vastly better understanding of the semiotics, morals and practices of bourgeois and popular culture; (3) letting go of eurocentrism, and creating a better understanding of nationalism, the postcolonial condition, ethnicity and post-nationalism; (4) developing an ecological Marxism which can confront the myth of a clean, sustainable capitalism, and provide alternatives; (5) returning to the subtlety of Marx’s critique of religion, which never regarded it as ‘simply obscurantism that can be wiped away through the cold light of reason’; (6) taking seriously and integrating insights from left-wing scholars such as Manuel Castells’ analysis of the ‘information society’, Polanyi’s theory of the ‘double movement’, and Wolfgang Streeck’s concept of ‘the end of capitalism’ (p. 195f.). According to Munck, potential ‘counter movements’ in Polanyi’s sense would include the new working class in the BRICS, the ‘surplus populations’ of the Global South, and new anti-capitalist social movements (p. 210f.).

Munck’s overall reading of the ‘big picture’ of Marxism seems sensible enough. But how credible is the text really? Interrogated more rigorously, and in more detail, I do find problems with his theoretical and historical judgements. Munck’s eclecticism leads to inconsistencies, and real explanation lapses into mere descriptivism. I do not doubt that many scholars will contest his selection of facts, details, sources, and interpretations of causes and effects. Some would argue that Munck’s story is already outdated by new events. The most controversial issue however concerns his eclectic post-Marxist stance itself: his ‘post-everything’ narrative.

Munck agrees with Alain Badiou that ‘Marxism does not exist’; it is ‘an empty name’ for ‘inconsistent or politically singular sets that cannot be amalgamated into a continuous, developmental unity’ (p. vi)*. Insisting on such a unity would indeed be totalitarian. There exists no overarching logic in the history of Marxist theory (a Hegelian fallacy), and Marxism cannot be ‘a self-contained, self-referential homogenous discourse’ (ibid.). What, then, is Marxism, and how can you possibly theorize an ‘empty name’?

Munck’s answer is to say that Marxism is, what a constellation of Marxisms actually do, or say – in the past, the present and the future. As external examiner, he will score the results of the spectacle, as it unfolds on the stage of world history. Of course, he cannot very well cope with ‘thousands of Marxisms’ all at once. So Munck ‘stylizes’ his treatment, risking accusations of caricature, distortion, reification, linguistic obfuscation, and falsification, despite nuancing. Thus, Marxism ‘does so-and-so’, Marxism ‘says so-and-so’, or, Marxism confronts an Other Marxism. Munck does not tally his scores with an ‘innocent reading’. Tacitly at least he has a partisan moral position, and he has an intellectual axe to grind. It is the position of an enlightened left-liberal scholar, just as concerned with irrationality and injustices in the world as anyone, and probably much more.

Yet, by his own argument, Marxism cannot be reconstructed ‘from the outside’, because Marxism must, through lived experience, learn to expel its own muck, and ‘integrate’ the missing bits, if it can. So the narrative ultimately reduces to the petitio principii, that ‘Marxism must reconstruct itself’, even although Munck’s own theory logically rules out that very possibility, at the same time. It’s a conundrum. Munck wants to help, sure, but would I buy a used Marxism from him – I did get the book, didn’t I? Munck’s poesis, however brilliant, still leaves me unsure about where it’s been, who the previous owners were, what they really did with it, and where it’s going. However, I do recommend his critique as a conversation starter.