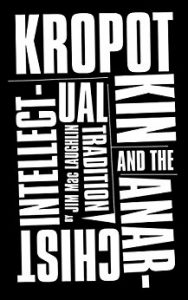 ‘Peter Kropotkin’s anarchist utopia wouldn’t be a utopia if everyone were Peter Kropotkin.’ This would be the cynical reply to Kropotkin’s anarchist convictions as that of a saintly utopian; however, against accounts of Kropotkin’s anarchism as “natural” or “given”, Mac Laughlin argues convincingly for characterizing Kropotkin’s anarchism as “scientific,” and, ‘the product of prolonged, multi-disciplinary, theoretical investigations’ (52). Part intellectual-historical introduction and part intellectual biography, his Kropotkin and the Anarchist Tradition is an in-depth and clearly constructed account of Kropotkin’s life and thought. According to the criteria it sets itself, it undoubtedly succeeds. The first section of the review deals with these criteria. The second section deals with the left-philosophical concerns that appear external to it. Whether this externality can be held against Mac Laughlin depends partly on what one makes of the relation between anarchism and philosophy. There is a philosophical critique of anarchism, but anarchists have, perhaps rightly, been suspicious of philosophy. Kropotkin himself accuses contemporaneous revolutionaries of engaging in “governmental metaphysics”. So while holding this externality against Mac Laughlin without taking the latter into account would itself be un-philosophical, what one can point out is the fact this relation goes unexplored.

The text has five chapters. The first is a good introduction to anarchist thought —from its etymological origins in Greek philosophy, where ‘anarchy’ is understood as a combination of the prefix ‘an’ (ἀν – in absence of) and ‘archos’ (ἀρχός – ruler or authority), to Gerrard Winstanley and the 17th century Digger resistance to land enclosure, to the anarchism of Godwin and Proudhoun. That Mac Laughlin doesn’t distinguish between the term’s political use (without a ruler) and its philosophical use—where arche, as in Aristotle, means principle or rule, rendering anarchy as ‘without a principle’—signals something of a general lack of philosophical sophistication, although this arguably lies outside the text’s purview. This philosophical elision explains his lack of an account of Kropotkin’s relation to post-structuralist anarchism—or indeed, to postanarchism—that is part of the revival of ‘academic anarchism’ he aptly describes in his conclusion. Importantly, this lack of philosophical sophistication constitutes a sufficient critique only if one holds anarchism must justify itself at the level of philosophy. It is not entirely clear that it does.

The second chapter is biographical, locating Kropotkin’s life and thought in the context of the 19th century Russian Empire. Mac Laughlin makes a concerted effort here to overturn what he sees as essentially the armchair psychology pervading previous literature. Against this reading of anarchist political convictions as “natural”, in the third chapter Mac Laughlin outlines Kropotkin’s “scientific legitimation” of anarchism. For Kropotkin, anarchism is derived from an inductive investigation into nature and human society and, ‘refuses to be imposed upon by the metaphysics of Hegel, Schelling and Kant’ (Kropotkin, in Mac Laughlin, 95). Instead, anarchism relies on the environmental and social sciences for practical examples of sociability and mutual aid. These examples of a primordial tendency for cooperation are man’s “constructive genius,” (96) a capacity universal to all human beings. Replacing historically formed natural communities with a juridical authority over individual subjects, the state becomes the site of this tendency’s erosion.

More than 100 years before the historicist or modernist schools of state theory then, Kropotkin pointed out the state’s socially constructed origins. Indeed, more than 100 years before Foucault, Kropotkin articulated a conceptual distinction between, on the one hand, the state, and, on the other, various techniques of government (6)—between the “top-down” question of the state and territorial sovereignty and, in the Foucauldian jargon, more molecular techniques of governmentality. Mac Laughlin is at his best pointing out this anticipatory aspect of Kropotkin’s thought.

Chapter four explores the relation between scientific anarchism and Darwinian theory, paying particular attention to the latter’s connection to the utilitarianism that dominated 19th century moral philosophy, against which Kropotkin’s own theory of ethics stands. While Mac Laughlin does well in explicating the grounds of Kropotkin’s ethical ontology, an investigation into both the success of this critique, as well as its conceptual similarities and dissimilarities with the utilitarianism it takes as its negative object, is worth exploring further.

Kropotkin’s denial of the distinction between morality and ethics—where ethics qua practical action mediates between the moral law as universal prescription and the realm of life—is a stimulating critique of transcendental morality in general. Justice and morality are not ‘abstract metaphysical concepts’, (173) but the outcome of instinctual impulses determined by social context. His argument is both normative and descriptive—the “good” is not determined by reason or revelation but is, ‘regulated by an infinite series of unwritten rules of propriety which are the fruit of their common experience as to what is good and bad’ (Kropotkin, 66). Kropotkin’s ontological ethics is amenable to the historical fact of cultural difference; yet, insofar as how moral a society is depends on whether certain tendencies are allowed to flourish, does not succumb to a relativism that exchanges the normative for the merely descriptive.

The fifth chapter describes Kropotkin’s geographical imagination and functions as Mac Laughlin’s own treatise on “anarchist political geography”. Again—more than 100 years before postcolonial studies, Kropotkin connected the rise of the modern nation state to imperial expansion—to a “geography of savagery” (82) against which the state could define itself. Darwinian concepts like “the survival of the fittest”, “natural selection”, and the “territorial imperative” that, throughout the 19th century, served as imperial justification (207). In terms of the disciplinary construction of geography—allied as it was with racist geopolitical and geographical motivations that set thousands of explorers out into the imperial peripheries—Kropotkin saw clearly how the civilization of the civilized depends on the barbarity of the barbarians. Kropotkin saw too the way in which the atomization of labour power, the erosion of rural communities, and concentration of industrial production in cities was the result not of the “natural” laws of the market but by state policy often justified by the scientific claims of disciplines such as anthropology, sociology, and, of course, geography (221).

The epilogue is the closest one gets to a genuine confrontation between Kropotkin’s anarchism with the broad left-philosophical tradition. For Mac Laughlin, perhaps rightly, both orthodox Marxism and its New Left revision were ill equipped to inform recent decentralized social movements. With the passing of ‘labour’ as legitimate counter-subject to capital, ‘the traditional anarchist values of spontaneity, personal and regional autonomy, decentralized decision-making and participatory politics were being widely espoused by all those who challenged pyramids of power’ (245). Moreover, the last decade has seen anarchism rediscovered as a source of theoretical energy.* There has been reciprocal influence between contemporary philosophy and anarchism. Examples here are Todd May’s 1994 The Political Philosophy of Post Structuralist Anarchism and the ‘anarchic metapolitics’ of Simon Critchley’s 2007 Infinitely Demanding. Perhaps because of Mac Laughlin’s conflation of the political and philosophical notions of anarchism he does not address the difference between the anarchism of Kropotkin and the anarchism of May or Critchley.

One relevant term is postanarchism—which does not occur in Mac Laughlin’s index—which draws on ‘post-structuralist’ philosophical trends. In the wake of the various critiques of essentialisms and deconstruction of teleology—in particular Heidegger’s deconstruction of metaphysics—it is no longer feasible, from this perspective, to maintain any trace of an idealist philosophical anthropology such as that which grounds Kropotkin’s classical anarchism. Politics must not be tied to, in other words, the essentialism of a theory of human nature. Anarchist politics is to be derived not from scientific investigation into the nature of the human, but from philosophy. Kropotkin’s concept of ‘mutual aid’ appears at first eminently teleological. Kropotkin repeatedly describes a “tendency”: ‘the tendency of the human race is to reduce government interference to zero; in fact, to abolish the state, the personification of injustice, oppression, and monopoly’, (35) as he puts it in his Conquest of Bread. This, of course, seems no longer feasible. Reiner Schurmann, describes metaphysics in general, for Heidegger, as a teleocracy—the power of the movement from a principal (or arche) and an end (a telos). The phenomenological tradition that follows sees humanism as an example of the Heideggerean “world picture” —the form of representation parallel with a capacity to instrumentalize the world. Postanarchism follows from this tradition. Critchley is an anarchist rather than a communist precisely because, ‘the idea of communism remains suspect because of the essentialist idealist metaphysics of species-being that determines the concept in Marx’s work’ (Critchley, 112).

One issue relevant here not discussed by Mac Laughlin is the historical constitution of human subjectivity, a problematic for a Marxist intellectual lineage from Lukacs to Adorno absent from Mac Laughlin’s admittedly brief account. If, as it does for Critchley and Levinas, infinity is that which is analytically prior so as to avoid essentialist humanism—if man is, instead, not subject to any a priori essential properties—does this not leave open justifications for all sorts of abuses? Indeed, while Kropotkin’s concept of mutual aid does at first seem teleocratic, it becomes clear that, at least in terms of any historical teleology, nothing is preconceived—all is the result of ‘collisions and encounters’: a “[social] equilibrium that can take millions of years to establish can be shattered by a ‘sudden redistribution of force’ or by a ‘momentary rupture of the equilibrium’ (180). In the same way that it is precisely the finitude of Chomsky’s universal grammar that allows for infinite human creativity, might the essentialism of Kropotkin’s concept of mutual aid be liberating rather than restricting? In this biopolitical age, might mutual aid render biology itself political? Wherever one falls on these issues it is clear that anarchy—in its philosophical and political registers—as well as mutual aid, may have more philosophical import than Mac Laughlin realizes. These issues deserve to be explored and taken seriously by the left-philosophical tradition. While lacking in philosophical sophistication, Mac Laughlin’s wonderful introduction to Kropotkin’s thought is not a bad place to begin this task.