Marx & Philosophy Review of BooksReviews‘Blood and Progress: Violence in Pursuit of Emancipation’ reviewed by Gary Browning 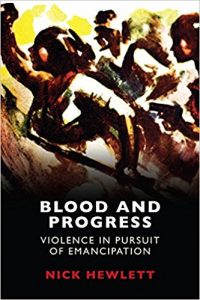 Nick Hewlett
Blood and Progress: Violence in Pursuit of Emancipation

Is recourse to violence justifiable in realising a progressive emancipatory cause? That is the primary question Hewlett sets himself in this thoughtful, well-written study. Along the way he discusses a host of issues relating to the nature of violence that are routinely ignored even as violence itself envelops our lives in myriad ways. While recognising that mental suffering is real and debilitating, Hewlett takes violence to occur when individuals suffer avoidable physical hardship. The concept of avoidable physical hardship incorporates the violence that is experienced in capitalist societies due to their maintenance of forms of structural inequality which impact upon the health and well-being of their members. In the light of the endemic violence that occurs in repressive societies that undertake and permit violence, Hewlett raises the question of how radicals in opposing oppressive regimes are to operate. Is violence justified in ending oppression? He undertakes a considered review of the ends and means of emancipation. The goal of achieving a non-violent society entails a fundamental commitment to peace and the elimination of violence in all its manifestations. Peace and non-violence have to be central to emancipatory objectives. But how are these radical emancipatory goals to be achieved? Does the end justify the violent means as many radicals from Lenin to Sartre have imagined? Or, as Gandhi and Martin Luther-King have urged, is violence to be renounced and peaceful means to be embraced? Hewlett responds directly to these questions, though his answers are not insensitive to the real dilemmas that revolutionaries have to face. He offers a nuanced reading of the issues involved, maintaining that the end of peace should inform the means by which it is to be brought about, and he concludes that the least force that is compatible with the realisation of the emancipatory goals should be employed.

The book explores questions relating to emancipation and violence in a coherent overall argument that is pursued in 4 main chapters. The first on capitalism, communism and violence sets out how capitalist and communist societies have resorted to and bred violence. Capitalism promotes violence across the globe in that powerful Western capitalist states do not shrink from using their power to undermine enemies of capital or the Western states that maintain it. Opponents in Latin America and the Middle East are killed systemically. Perhaps as importantly Western capitalist states perpetrate violence through the structure of their societies. Amongst subordinate classes, Injuries and deaths occur that could be avoided if resources were to be distributed more equally. If capitalist states are taken as promoting violence systemically, historic communist states in Russia, Eastern Europe and China are admitted to have committed violence on a large scale. Stalinism and Maoism have harboured brutal, violent regimes, whatever else might be said in their defence. Hewlett’s recognition of the violence of historic socialist regimes underpins his determination to ensure that emancipatory theory and practice reflects a concern to minimise violence.

Chapter 3, ‘Castro Humanism and Revolution’, is integral to the overall argument of the book. It deals with what Hewlett takes to be an exemplary case of a revolutionary movement that takes power and rules in ways that are humane and minimise the resort to violence. Hewlett provides a considered historical and theoretical treatment of the revolutionary capture and exercise of power in Cuba. He urges that a minimum of force was used against opponents in assuming power and in maintaining the regime while significant progress was made in ousting a reviled dictatorship and in achieving a more equal peaceful society. Castro and Cuban revolutionary leaders are seen as operating in a dialectical way, recognising that the means to achieve emancipation must be influenced by the end that is sought, namely a peaceful and emancipated society. This assessment of Castro’s Cuba is controversial given the far from democratic nature of the Cuban regime, but all interpretation is defeasible and it offers a historical dialectical paradigm for Hewlett’s overall argument on means and ends.

The following chapter, ‘Marx, Engels and the Place of Violence in History’ re-examines Marx and Marxism by focusing upon how power is to be obtained and used. The pros and cons of securing power through violence are taken to be undertheorized by Marx and Marxists more generally. This relative neglect relates to Marx’s critique of utopian socialism, whereby utopians are criticised for looking abstractly into the future rather than focusing upon the concrete nature of capital and prevailing social conditions. Hewlett, however, sees the ethics involved in the takeover and exercise of power as important and he identifies aspects of Marx’s thought that bears upon this issue. Marx is seen to combine an economic critique of capital with moral condemnation of its inhumanity and with an implicit notion of the moral claims of communist society. The prospective ends of communism are taken to bear dialectically upon the means to be employed in taking power. Hewlett argues that minimum force is to be used in taking power as a commitment to peaceful means responds dialectically to the ends of peace, democracy and equality that are to be realised in communism.

Chapter 5, ‘Terrorism’ provides a judicious account of terrorism that highlights its susceptibility to ideological definition and discussion. Hewlett follows Webel (145) in taking terrorism to represent the use or threat of violence to promote terror and influence others so as to achieve political goals. This understanding of terrorism recognises that terrorism can operate from above as well as below. Indeed, Hewlett follows Chomsky is seeing governments as playing a prominent role in inducing terror to realise their ambitions. Capitalist states might be highly vocal in condemning acts of terror from below but they are silent about their own use of violence. Hewlett’s critical review of terror from above and his recognition that terror from below often derives from injustice does not entail that he endorses the use of terror against non-combatant civilians. For instance he condemns the terrorism of ISIS, as he is opposed to violence and he argues that the resort to terrorism tends to turn the tide of opinion against its perpetrators. This is debatable as terror has often contributed to maintaining the profile of a cause that might have been overlooked or forgotten. But the discussion of terrorism testifies to the original and critical line of argument that is followed throughout the book.

This book is a stimulating and thoughtful study of political violence. It reads well and lucidly in analysing the means and ends of emancipatory politics. It highlights how violence must be discussed more explicitly than has been done hitherto. The author is surely right in this. Hewlett’s own substantive argument that the means and ends of political engagement are to be related dialectically in that an ultimate commitment to non-violence should shape how power is to be assumed is well worth consideration. This argument does not stipulate what is to be done, for that will depend upon a reading of circumstances and on a calculation of future developments. Hewlett is right in recognising that there cannot be a rule book for revolutionary action. He might have included a discussion of Marx’s conception of communism that is set out in his early writings and a consideration of Marx’s notion of a revolutionary consciousness that is for itself, but there is always more to be said, and this is a book that makes a significant contribution to emancipatory theory and practice.