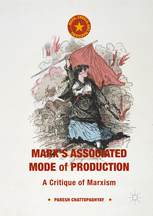 The approaching 200th anniversary of Karl Marx’s birth, just like the recently marked 100th anniversary of the Russian Revolution, will certainly give rise to a large number of discussions and celebrations, as well as to wide criticism of Marx’s legacy. This is particularly true for discussions concerning Marx’s vision of an emancipated society. This is why, in the first place, one could salute Paresh Chattopadhyay’s book Marx’s Associated Mode of Production: A Critique of Marxism. The author intends, on the one hand, to assert the real significance of what Marx envisaged as human emancipation (1); but, on the other hand, Chattopadhyay also wants to distinguish Marx’s image of emancipation from what his disciples have made of it, and thus from the transformation of “socialism into a Party-State affair” (6). We thus come to understand that the second part of the book’s title, A Critique of Marxism, refers mainly to those authors from the 20th Century who have come to be seen as the “dominant Left” (215), such as Lenin, Stalin and Mao. Against them, Chattopadhyay discusses Marx’s notion of emancipation as it appears in the numerous writings of Marx himself – that is, Marx’s idea of emancipation is defended here from some of its interpreters. Whether those authors do indeed represent the best way to discuss Marx’s (and sometimes Engels’) work is an issue that I shall address below.

Let me begin by briefly introducing Chattopadhyay’s book. It consists of an introduction and eleven chapters, covering what could be described as three great complexes. The first four chapters deal with Marx’s critique of political economy, its roots and its relations with a post-capitalist society. These are the cluster of problems regarding the foundations of Marx’s thought. Chapters six to eight deal with the depth and reach of Marx’s insights regarding elements of capitalist society’s organisation. In chapter six, “Women’s labour and capital accumulation”, Chattopadhyay defends Marx from feminist criticism of his patriarchal bias and ignorance of domestic labour (75). Chapter seven presents a discussion of Marx’s and Engels’ anticipatory use of analytical categories regarding questions of globalisation, and chapter eight returns to a textual exegesis of Marx’s texts, and focusses on his crisis theory. These chapters compose the second of the three parts into which I think the book can be best divided, as they are all centred around the question of the fruitfulness of Marx’s ideas for characterising and explaining current problems. Finally, the third part of the book is where the author discusses more closely his own major concern: the uses (and abuses) of the idea of emancipation at the hands of representatives of Twentieth Century Socialism (TCS); or, as we are to infer from the book’s title, Marxism.

The first part of the book, which focusses on the foundations of Marx’s critique of political economy, already shows the first of Chattopadhyay’s strengths, which is his enormous knowledge of Marx’s published texts, notebooks, excerpts from books, and letters. Due to that knowledge, in the first chapter, “Marx’s First Critique of Political Economy”, the reader is presented with a defence of the idea that in all of Marx’s writings, he always maintained, as the focal point of his theory of emancipation, the notion of liberation from alienation (that is, liberation from alienation through the political-practical struggle of the proletariat). The importance of characterising emancipation as liberation from alienation only really comes into view in the third chapter, “Post-Capitalist Society: A Marxian portrait”, and does so if one understands the concept of emancipation as independent of the names that have been given to it (Socialism, Communism). Marx envisioned it as a “mode of production where the labour of the individual is posited from the start as social labour, [where] the product of labour ceases to take commodity form, this form of “all-sided alienation” (64). Chattopadhyay’s position throughout his book is that Marx’s idea of emancipation is envisioned in terms of an association that escapes from the alienation brought about by the capitalist division of labour. This alienation is engendered by capitalism because in this mode of production, subjects relate to each other as materially dependent on each other, that is, neither as personally dependent (as in traditional modes of production) nor as freely associated individuals. In the capitalist mode of production people depend on others to satisfy their needs, but such needs are met with indifference, because labour is – and in capitalism it will always be, according to Chattopadhyay – a commodity. Wage labour not only amounts to the contrary of alienation: It is also “a necessary and sufficient condition for the existence of the private ownership of the means of production” (9).

Let us jump now to the third part of my division of the book, where Chattopadhyay attempts to defend Marx and the Marxian text from Marxism. Chapter nine of the book (“On Market Socialism”) is where this third part begins. Chattopadhyay starts with an interesting comparison of the debates involving Friedrich Hayek, Ludwig von Mises, Oskar Lange and, more recently, Marxist scholars David Schweickart and Michael Howard, in order to situate the historical emergence of the notion of market socialism. Unsurprisingly, he concludes with a turn to an exegetic reading of Marx’s text: According to him, forms of cooperation espoused by Market Socialists do indeed have to respond to imperatives of self-expansion of values, while at the same time such modes of production do not grant individuals the means of production, merely transforming such producers into cooperative wage-labourers 149). The problem with cooperativism is the same that would reappear – with a monstrous face – in the Soviet and Chinese Party-States. In the latter case, however, the culprits are pointed out as Lenin, who reinterpreted Marx’s Gothakritik as a stage plan from Socialism to Communism, by which the State would be necessary, and Stalin, who added to Lenin’s notion of a Party-State guided transition to communism, the notion of public- (meaning: State-) owned means of production, thus institutionalising wage labour in favour of the Party-State (229-230). At this point, the reader cannot help but wonder: why is it that Chattopadhyay has chosen to debate Marx’s notion of emancipation within the framework set by those interpreters of Marx who did not contribute to the development of the idea of freedom? In the best chapter of the book, “The Early Roots of Marx’s Capital”, Chattopadhyay gives an impressive account of the Association by characterizing it as a mode of production where individuals are free to associate with each other (207), that is, freedom happens to be the central category for his analysis. So, it is just not clear why he chose to defend the end of wage labour through a discussion that is rather sterile. In other words, Lenin, Stalin and Mao are not only poor interpreters of Marxism as a doctrine of freedom, but they are also not analytically important. But, having come to the end of the book, the reader may have come to the conclusion that although Chattopadhyay’s discussion could function as a fruitful account of Marx’s idea of emancipation, it is actually quite orthodox, and at times seems like a passionate defence of Marx. That brings us to the chapters in the second part of his book.

Here, as mentioned above, we have three chapters: One on Marx’s theory of crisis, one on Marx’s and Engels’ anticipation of capital’s globalization and one on feminist criticism of Marx. Regarding the first of the three, Chattopadhyay concludes with the remarkable affirmation that already in the Manifesto, Marx’s (and Engels’) demonstrations of how credit works or of the capital’s global movement highlight characteristics that have only become magnified today. In consequence, it is normal that for him “’Neo-liberalism” signifies the old classical liberalism in a new situation” (109, n4). All the research on neoliberalism (for instance from a Marxist point of view, as in Gérard Duménil and Dominique Levy’s Capital Resurgent) does not need to be categorically accessed. Such problems of orthodoxy, which entail that this promising book is more valuable as a source of Marx’s texts than as a categorical discussion on emancipation, or as an analysis of current social struggle, come to their culmination in the chapter on feminism. Despite the immense amount of feminist literature, Marxist or not, on the problem of domestic work and emancipation, Chattopadhyay prefers to adopt a twofold strategy in order to defend Marx from such criticism. On the one hand, he challenges Marx’s characterisation as having a patriarchal bias (80); on the other hand, he affirms that Marx’s definition of wage labour has nothing intrinsically sexist about it, so that the problem of exploitation of women or domestic work can be dissolved within the capitalist logic (92). That this defence is done without any reference to a woman’s text – Chattopadhyay takes the summary of criticism from Peter Custer; authors as Linda Nicholson, Heidi Hartmann or Silvia Federici, to name just a few, are left aside here – is just embarrassing.

Such problems are indicative that, despite its impressive insight and depth of study of into Marx’s work, particularly his marginal notes, sketches and excerpt from books, Chattopadhyay’s own book seems best suited to those who want to discuss Marx’s writings, rather than those who want to approach the great thinker’s ideas either as a key to understanding current social problems, or as a means towards thinking more broadly about the emancipatory content of Marx’s thought.