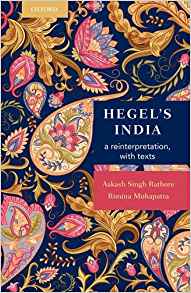 Of all those philosophers accused of being Eurocentrist, none has been so vehemently criticized by the postcolonialist school as Georg Wilhelm Friedrich Hegel. In academic circles that valorize the Third World, the German philosopher’s very name conjures the image of a domineering White racist male whose mammoth system sought to trivialize and crush the knowledge systems of non-European societies. A set of lectures by Ranajit Guha, the key intellectual of the Subaltern Studies group, aptly named History at the Limit of World History (Columbia University Press, 2002), passionately denounced Hegel’s dismissal of Indian history.

Yet, despite this ‘dismissal’, Hegel dedicated considerable space to studying India, its philosophical systems and religions. The editors of Hegel’s India note that Hegel’s writings on India come close to 80000 words – and as far as sheer number of words go, this is as much as his attention to the study of the Greek world. Not only have Rathore and Mohapatra carefully collated Hegel’s writings on India, including translations of hitherto unfamiliar texts, in their brilliant reinterpretation of these writings, provide a justification, which is both sympathetic and critical, of Hegel’s engagement with India.

Rathore and Mohapatra’s Introduction to this volume note Hegel’s cultural biases and inconsistencies when dealing with Indian works of art, religion and philosophy. Not falling for postcolonial verdicts on Hegel though, they also pay due attention to the context in which Hegel was operating, without allowing context to become an excuse for lapses on the part of Hegel. The editors appreciatively note Hegel’s personal ambition to collect knowledge from across the globe to synthesize it all into one resource, one system. (24) And in that effort, even if Hegel’s approach towards the thoughts of the ancient Indians appears caustic in some instances, he was definitely not dismissive.

The study and curation of ancient Indian texts accompanied the European colonial enterprise. Indeed, one aspect of Orientalist knowledge production saw in the Indians an assortment of incompetent rulers, effeminate peoples and criminal tribes, barbaric traditions and demonic pagan rituals. But another romanticized India’s culture, its mythologies and religions, its social structures as features of an ancient and noble civilization. Many of the German Romantics, who were Hegel’s contemporaries, were influenced by this latter image of India. And thus, as Rathore and Mohapatra note, Hegel, who decisively broke from the Romantic tradition, was compelled to challenge these notions.

Hegel’s opposition to Hinduism becomes clear from his perspective on religion and its relation to the individual and society as such. Hegel defends a subjective religion, not from an individualist standpoint, but rather from the view of the state, i.e. how a subjective religion can make better citizens. To Hegel, the idea of personal salvation was an undermining of Republican virtue. As much as Hegel, a declared Lutheran, admired Christianity, he was also critical of its escapism and its ethic for the individual which he believed was more suitable for a cult than for a society. In contrast, Hegel saw in the ancient Greek and Roman Republics the value of realizing the highest good in the service of the public good and the state. Further, he valued the sacrifice of the individual for a secular authority more than the sacrifice for heavenly rewards.

Hegel wanted faith to be grounded in Reason. He also saw God as a rational being who acted from necessity. His materialist critique is evident from his assertion in his Lectures on the Philosophy of Religion that “Without the world God is not God.” Differing from the theologians who looked at God as a transcendent entity, Hegel saw God as immanent, embodied in the finite world. In Hegel’s understanding, the Indian religion promoted a pantheism that placed God as a concrete universal, with little or no respect for the particular. Hegel saw problems in pantheism as it was not an abstract universal.

As he argues in his discussions on the Hindu text Bhagavad Gita “as it is the most specific characteristic of pantheism that the individual beings and all finite qualities must be taken as not being independent of but rather as those which are only dissolved, negated in pure Being, this only proves actually the incapability of the people entertaining these false conceptions to free themselves from the belief in the independency, the absoluteness of the finite, being unable to comprehend what really is.” (130) To add, even the figure of Krishna as godhead was not an embodiment of Reason or freedom shaped by necessity, but was representative of a self-consuming fatalism. Indeed, Krishna the deity is himself killed by a hunter’s arrow owing to an earlier curse. Further, Krishna as a moral instructor preaches particular duties, and not universal rights. In this, Hegel sees a defense of divinely ordained rigid social hierarchies. Two prominent individuals in the previous century were reported to have always carried a copy of the Bhagavad Gita in their possession. One was Mahatma Gandhi, the great apostle of non-violence, who was nevertheless accused by anti-caste thinkers of not adequately addressing the question of caste in Indian society and its relation to Hinduism. The other was Heinrich Himmler.

To Hegel, the finite does not disappear in the absolute, but rather the absolute comes into being only through the finite. Also, the universal does not precede the particular in time, but rather, the universal is the raison d’être of the particular which comes first in existence. It is this core aspect of the Hegelian schema which enables us to understand his critique of religion. Hegel’s qualified and cautious support for Christianity was based on the premise that it would contribute to the building of a new civic religion based on Reason, which would not strangulate the particular needs of the human. In the Indian religions he saw, despite the high aesthetic value of Indian art and literature, nothing more than the suppression or even erasure of the particular, an almost nihilist doctrine.

It is likely that some would accuse Hegel of overkill when he states “The Hindus will not tread upon ants, but they are perfectly indifferent when poor wanderers pine away with hunger. The Brahmins are especially immoral. […] When they take any part in public life they show themselves avaricious, deceitful, voluptuous.” (158) The iconoclastic rationalist leader of the Dravidian movement, Periyar E V Ramasamy, echoed strikingly similar views when he denounced the stranglehold of Brahmins and other upper-castes over the Indian anti-colonial movement. When one reads Hegel noting that “As the Brahmins enjoy advantages over the other Castes, the latter in their turn have privileges according to precedence, over their inferiors,” (153) one finds echoes of this observation in the works of the brilliant pro-Enlightenment thinker and Dalit leader B R Ambedkar who theorized caste as a system of graded inequalities.

At a lay reading, it might appear that Hegel is conflating Indian religions with several, sometimes contradictory, systems of Indian philosophy and dismissing both, and it might be quite tempting to discover in him a racist who had a profound contempt for all things non-European. A deeper understanding of the gargantuan Hegelian corpus would throw light on a man who wanted to engage with Indian writings, despite all the prejudices of his time, and give them a due place in the philosophical system that he was constructing. If Hegel is still accused of being unkind to Hindu philosophy, hear what Ambedkar said in his Annihilation of Caste: “you have got to apply the dynamite to the Vedas and the Shastras, which deny any part to reason; to the Vedas and Shastras, which deny any part to morality.” Though both Ambedkar and Periyar were very familiar with the works of Karl Marx, there is little to prove that they engaged with Hegel in their writings. Yet if, as Slavoj Zizek says in his blurb for Hegel’s India, we have to “discern the traces of what would have been India’s Hegel,” careful comparative readings of these thinkers and Hegel can throw new light on understanding social and economic inequalities in India. More than anyone else, intellectuals and activists challenging entrenched casteism and the upsurge of Hindu fundamentalism in India will be eternally grateful for Hegel’s India.