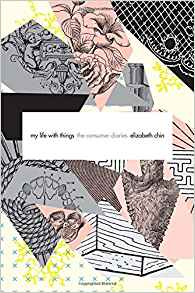 Elizabeth Chin
My Life with Things: The Consumer Diaries

It is disarming for a reviewer of an academic work to read towards the end that the author really “just wants to write”, to enjoy the “craft” and “expressiveness” of writing; reflecting on ‘Writing as Practice and Process’ Chin believes she has “earned the right” to “throw away theory” (200). It’s a wish carried through in the final section of My Life With Things, which is effectively a short story called ‘This Never Happened: A Surreal Autoethnography’, demanding the reader adopt the author’s ultimately preferred fictive or at least non-theoretic stance. Is the ‘right to write’ earned? Chin points to the four thick binders of field notes that ground her writing (187).

The book is structured into four chapters with the bulk comprising one called ‘The Entries’. These are the field notes, 41 in total, each a page or two with titles like ‘My Purple Shoes’, ‘Cyberfucked’, ‘Curing Rug Lust’, ‘Other People’s Labor’, ‘Capitalism Makes Me Sick’, ‘Turning the Tables’. In “making myself the object of study”, Chin uses her professional anthropological skills to document her own consumer life; but in practice they extend to autobiographical reports of feelings about her working and everyday life more generally (4). Indeed Chin acknowledges that the “anthropological fieldwork on myself” is a series of diary entries (27). There are indications of a prevailing theoretical context in Chin’s declaration that “I am a commodity fetishist” (8). And also in the use of accounts of Karl and daughter Jenny Marx’s own “consumer life” alongside the personal entries (28).

Chin’s admission to ‘commodity fetishism’ is one to a ‘guilty pleasure’ in consumer goods rather than some theoretic epiphany; but with knowledge of the Frankfurt School’s classic lines on consumerism and the culture industry too. In ‘Purple Shoes’, for example, she notes that her choices of consumer goods create a personal identity: “they take on a me-ness that is utterly unique”, especially her purple shoes bought at Ross Stores (58). Chin’s notes ascribe this ‘me-ness’ to their being bought on impulse and getting her noticed when she wears them: “it’s a guilty pleasure, but there’s real pleasure in making a choice that gets you noticed” and one that shows some ‘style’ (60). This kind of field note at least offers a challenge to the one dimensionality of Herbert Marcuse’s consumer in advanced capitalist economies, an individual seemingly irretrievably lost to the idiocy of shopping. Adorno and Horkheimer’s chapter on the ‘Culture Industry’ in Dialectic of Enlightenment has a similarly pessimistic and dismissive understanding of consumer behaviour, arguing that the intimate reactions of human beings have been so reified that “personality scarcely signifies anything more than shining white teeth and freedom from body odour and emotions”; “the triumph of advertising in the culture industry is that consumers feel compelled to buy and use its products even though they see through them.” They are conclusions that as Fredric Jameson (in Late Capitalism) has noted make the chapter both “notorious” as well as “seminal”. (Horkheimer did warn Adorno in Towards a New Manifesto, a transcription of a conversation between them in 1956, that “to ridicule American consumerism is disgraceful unless the reader can somehow pick up how such matters should be regarded. Otherwise it is merely abuse”.) Jameson argued that the Adorno and Horkheimer account is unduly limited to ‘entertainment’ and doesn’t follow through on the possibility that the aesthetic autonomy by and large accorded to authentic artworks by the Frankfurt School extends beyond them to other made things. In other words, it is not solely revolutionary art that challenges ‘culture’, escapes simply affirming social norms, by its authentic making; perhaps authentic making extends to things of everyday use too, like those Chin records.

If Chin’s field notes do contribute to suggesting this possibility, it is perhaps in those that consider the labour that lies behind commodities. In ‘Other People’s Work’ Chin notes her dilemma and feelings of guilt about whether to get a Mexican maid to do the housework: “does my PhD earn me the right to have someone do the dirty jobs in my home?” (95). It is set against an account of the Marx family’s household and their ‘maid’ Helene Demuth (this is perhaps a moot historical point given Eleanor Marx’s ‘reminiscence’ of Demuth as a close friend and companion of the Marx family and Engels). The field note records the Idea that a maid makes most of us (well, those who can afford it!) uncomfortable in ways commodities don’t because he or she is “much too manifest to ignore” whereas exploitative social relations lying behind things are obscured as we give things, like mass produced, cheap purple shoes, a life of their own, indeed believe we can make them uniquely ours (96).

The field note ‘Capitalism Makes Me Sick’ also combines a first-hand narrative with an account of Marx’s family life and some proto-Marxist theoretic conclusion. So Chin notes her personal depression and the medication she takes but wants to urge that “it’s capitalism!” that’s to blame (140). In other words, her depression is “really about money and work” and not serotonin levels (141). The work, perhaps ironically, is her academic work, or at least its more administrative aspects. Specifically, the long hours, having too much to do; what Chin associates with capitalism’s ‘work ethic’. The Marx family are then noted, including Jenny Marx’s mend-and-make-do sewing and the family’s use of pawnshops. Chin notes how this use and experience might relate to “Marx’s notion of the misplaced personhood inherent to the alienation of the commodity” (147).

Such moves from personal experiences and reflections to the terminology of Marxist analysis are provocative, at least in their context as field notes. But the work of theorizing remains. We might consider, for example, how this record of a life with things in an advanced, post-industrial capitalist society sits with recent accounts of late capitalism. So a recent proposal is that late capitalism is essentially an ‘economy of enrichment’ and this perhaps strikes a chord with Chin’s ambiguous feelings, guilt and pleasure, about the things she buys. In ‘The Economic Life Of Things’ by Luc Boltanski and Arnaud Esquerre (2016), the dominant ‘Pop Age’ economy of throw-away objects has given way to markets in, for example, the fine arts and luxury goods. The authors analyse value-setting work, the ‘work of enrichment’, that involves elaborating a past that gives objects historical significance: “particularity, originality, uncommonness, and distinctive provenance”. The work is done primarily by curators, cultural historians, academics, collectors, auctioneers, and celebrities. They also note the work of a precariat of educated young who aspire to be ‘creatives’. It is perhaps epitomised, after Jameson (2015), by the curated work of art where the curator-artist selects bits from “theoretical or philosophical sources … putting them all together in a kind of conceptual installation, in which we marvel at the new intellectual space thereby momentarily produced”. It might seem that indeed Chin, with her concluding remarks, noted initially above, about moving from a life with things to a life of ‘craft’, is engaging in a similar kind of curatorial practice; that, furthermore, we are left only to marvel at the completed (merely enriched) work. But I think Chin’s field notes, revealing her sense of both pleasure and guilt in her life with things, of the labour conditions and histories she realizes they mask, and of connections with left thinking generally, point to a positive notion of enrichment connected to the aesthetic value of authentically made things.

The possibility that aesthetic value offers a real, radical alternative to the sham values of the ‘economy of enrichment’ is rejected by Jameson: “the beautiful, which was able to be a subversive category in the late nineteenth century… in the hands of Ruskin and [William] Morris, Oscar Wilde, the symbolists and the decadents, the ﬁn de siècle… has lost all power either as an effect or an ideal.” But Jameson’s rejection of the transformational effectiveness of the ‘aesthetic’ has been challenged recently by Kristen Ross (2016) in Communal Luxury. Her account challenges too the view that the world of ‘enriched things’ “is not conducive to the emergence of new social and political forces … capable of redeploying value-determination arrangements to more egalitarian ends” as Boltanski and Esquerre declare. Ross argues that ideas about ‘polytechnic’ or ‘integrated’ education circulating during the 1871 Paris Commune – an education that would overcome the division of work between head and hand – evidenced a proper interest and responsibility in the material details of everyday life and in the idea of elevating them by art. Here, in the way things are made, was the source of happiness in a communist society, an idea at the heart of Morris’s aesthetic politics. So the member of the Marx family we might best note in the context of Chin’s hankering for such a well-crafted everyday life with things is Eleanor. Rachel Holmes (2014) biography of Eleanor Marx reveals a precocious child, thoughtful and playful, her life rich in the arts, essentially in performance and story-telling, where ‘things’ are props. This is one route out of her ‘commodity fetishism’ that Chin might have detailed more in her accounts of the Marx’s family life. Eleanor, along with her contemporary and colleague in the early British socialist movement, the designer, maker and political activist, May Morris, showed ways out of the ‘Doll’s House’ of consumerism to aesthetic lives of social and artful using and making.