Marx & Philosophy Review of BooksReviews‘Decolonising the Westernised University: Interventions in Philosophy of Education from Within and Without’ reviewed by Lucas Van Milders 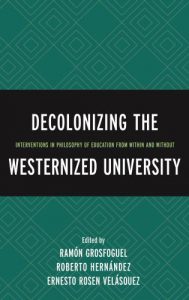 Ramón Grosfoguel, Roberto D. Hernández and Ernesto Rosen Velásquez (eds)
Decolonising the Westernised University: Interventions in Philosophy of Education from Within and Without

“There is a lot of blood under these universities” (ix). These words open Decolonising the Westernised University: Interventions in Philosophy of Education from Within and Without; a volume that seeks to explore the many ways in which the university is complicit in the reproduction of colonial, racial, capitalist, sexist, and other hierarchical relations of power. The book thereby falls into a critical strand of scholarship that has garnered an increasing amount of importance in recent debates on the canonical whiteness of curriculum, pedagogy, and the university more broadly. However, this book seeks to do more than merely reproduce these criticisms, as it is propelled by an effort to “construct learning spaces in ways that are not simply anti-racist and anti-sexist but also anti-capitalist, anti-Eurocentric, anti-imperial, and anti-colonial” (xii). It is comprised of four parts, each of which contains a number of chapters. Whereas the first and second parts present a plethora of different narratives, explorations, accounts, and critiques that navigate the complicity of the Westernised university in reproducing colonial relations of power, the third and fourth part provide a more detailed focus on decolonial pedagogy and human rights, the Arizona ban, and the Ayotzinapa tragedy. The first two parts contain a diverse variety of ideas concerning the fundamental thematic that propels the volume: namely, the view that the university, as an institution of knowledge production, is – through its complicity in reproducing relations of capitalist exploitation and colonial hierarchy – part of the problem, as opposed to the solution. Although a number of chapters tend to stretch the ways in which that thematic can be navigated, the overall volume stands out unambiguously as an urgent and productive intervention in philosophy of education that demands that we question the ways in which the university – or, as some authors refer to it, the pluriveristy – can be transformed into an institution of liberation.

The complicity of the university in reproducing colonial relations of hierarchy and power should by no means exclude the possibility of it becoming an institution in which, as Boaventura de Sousa Santos puts it, there is a future for “nonconformist, critical, heterodox, non-marketable knowledge, and for professors, researchers, and students pursuing it” (5). Indeed, the university is both a Westernised institution that systematically disseminates a Westernised understanding of the world as well as a neoliberal institution that subjectifies and subjects students into atomised individuals that require salaried labour in order to sustain the capitalist organisation of the global economy. Yet this necessitates the question as to how education can be retransformed in order to confront, rather than exacerbate, the problems of the 21st century. For Ernesto Rosen Velásquez, this requires a reexamination of the well-known assumption that education improves upward socio-economic mobility. Although a controversial argument at first, the characterisation of dropouts as a form of delinking from the university’s dynamics of student subjectivation and knowledge commodification allows us to understand its industrial role in constructing docile citizens. The racialised dimension of this process is evident from the fact that “various dimensions of one’s social identity – race, ethnicity, sex, gender, class – are either diminished so they become indistinguishable from their white, heterosexual, middle-class American counterparts that function as mediators between the West and the rest or they enter the labour market as ethnoracial ornaments” (56). The book repeatedly argues for, and underscores the necessity of, an intersectional standpoint that sees the logics of capitalism and colonialism in their historical entanglement. Nelson Maldonado-Torres, for instance, argues that debates about the impact of neoliberalism in education ought to be understood as involving questions that have historically informed the plight of communities of colour: “they do not produce value and must constantly attempt to prove their right to exist and receive support from the state, and they are ultimately dispensable. Neoliberalism thus seems to be informed by a logic of racism” (47). The solution, he argues, therefore consists in moving beyond the sterile debate that casts education as a public good that is being dismantled by neoliberal predators. Only by embedding these discussions of neoliberalism in the broader circuits of racialised neoapartheid – which involves the continued segregation of communities among racialised lines – and by taking seriously projects and movements that seek to cultivate emancipatory and decolonial modes of acting and thinking, the argument goes, can the Westernised university be resisted.

This, however, poses some fundamental challenges. Resisting the Westernised university and its Eurocentric epistemology might initially strike one as necessitating delinking from the university and its epistemology entirely. Indeed, as Ramón Grosfoguel writes, this epistemology privileges “a Western male canon of thought and the study of the “other’ as an object rather than as a knowledge-producing subject – concealing at the same time the geo-politics and the body-politics through which white academics and intellectuals think” (27-28). Yet although this book’s subtitle implies the existence of a demarcated inside and outside of the university, resistance should direct itself towards a pluriversity where Western modes of knowledge production are provincialised as merely one particular way of relating to the world that is invited to enter a non-hierarchical and inter-epistemic dialogue that cultivates a decolonial pluriversity-to-come. There is therefore no binary between inside and outside but rather an escape from the suppression of alternative epistemologies and cosmologies into an ecology of knowledges. This not only requires an epistemic but also, in the words of Anders Burman, an ontological form of disobedience that seeks “to use any ontological opening, any cracks and fissures in dominant reality, to carve out an ontological locus of enunciation different from the one embraced within the coloniality of reality, and to do so from within institutions of higher education” (86). Similarly to Stefano Harney and Fred Moten in The Undercommons: Fugitive Planning & Black Study (2013), Burman argues that challenges to the Westernised and neoliberal university should consist of operating through the inside/outside binary and exploiting the cracks within the university’s dynamics of operation as sites of resistance.

At its core, Decolonising the Westernised University is characterised and influenced by Latin American philosophy and particularly by the philosophy of liberation of Enrique Dussel. Dussel’s project, which understands the path towards liberation as necessarily including oppressed and excluded perspectives of knowledge production, is often quoted as animating alternative accounts of education. For Robert Aman, delinking from the Western epistemology requires interculturalidad, a notion that is “intertwined with an act of restorative justice for the way in which the nation-state for centuries has turned the indigenous populations into its blind spot” (99). Indeed, it is often the knowledges, beliefs, and practices of indigenous peoples that are the victim of the Westernised university. As knowledge does not emanate out of a vacuum, but is the product of an embodied understanding of and relation to the world, a pluriversity would consist of a plurality of cosmologies, epistemologies, and realities, that, in the well-known words of Frantz Fanon, belong to the zone of non-being. This also resonates in the very conception of humanitas, which Tendayi Sithole argues is still deeply westernised in its conception as different from the non-Western and uncivilised anthropos. At its heart, decolonising the Westernised university is a project that seeks to reclaim not only what it means to be human but, more importantly, who is included in that conception of humanity. The racialised conception of humanity that is reproduced by the Westernised university can, for instance, also be retrieved in the contemporary conception of human rights. As Camilo Pérez-Bustillo writes, this concerns the “uniquely Western and specifically European character and origins of contemporary human rights and international law within the framework of the enlightenment and modernity, liberalism, and neo-liberalism” (170).

Similar explorations of what a decolonised university might look like constitute the focus of the last chapters in the book. Nassim Noroozi provides a reconceptualisation of pedagogy as involving “a different regulation of the students’ economy of knowledge” (140). This involves a pedagogy of time that moves against the politics of speed that produces ideas such as post-colonial or post-racial societies. Another highlight of these last chapters includes Andrea J. Pitts’s intervention in the banning of Mexican American Studies in Tucson, Arizona. As an instrument of nation-building and protection of the American curriculum, Pitts exposes it as an instrument in the service of white supremacy. It is indeed through the intersection of neoliberal subjectivation and Eurocentric epistemology that non-white students are assimilated and conformed into Anglo-American values and ways of life. This assimilation then acts as a fig leaf that conceals a conflict at the heart of whiteness. For if “whiteness is everything and nothing, if whiteness as a racial category does not exist except in conflict with others, how can we understand racial politics in a social structure that centers whites, yet has no center?” (197). It is indeed in the assumption that education ought to produce docile citizens that share the same social and historical background that the institutional entrenchment of white supremacy can be exposed. For these reasons, the book ends by framing the tragedy of Ayotzinapa as illustrative of its main critique: the university as an institution in which “one specific reality – with its grotesque asymmetries of power; “a world with masters and slaves” with “cannibal economies, consuming the lives of some for the luxury of others” – is “naturalised and legitimised, generated, and reproduced” (79). For Amy Reed-Sandoval, the tragic disappearance of forty-three students from one of Mexico’s escuelas normales is not only an arguably gruesome and horrendous act, but also an attack against Latin American philosophy itself. The escuelas normales are known to be spaces of alternative, state-independent forms of knowledge production that are emblematic of Latin American philosophy.

In summary, this volume offers a highly insightful contribution to debates in critical pedagogy as well as to practices of decolonisation more generally. Its numerous strengths include a shared analys in all of its chapters that sees the two main critiques deployed against the contemporary university (i.e. its neoliberal and its Westernised character) as historically entangled and presently reinforcing each other. This intersectional standpoint is then carried beyond the inside/outside dichotomy as it asks us to see a resistance against the Westernised university as one that is simultaneously within and without. Although it is not entirely clear how some chapters relate to this core thematic (the final chapter by Luis Rubén Díaz Cepeda – though an interesting analysis in itself – fails to consistently demonstrate its relevance to the rest of the volume), the volume unambiguously succeeds in conveying the urgency with which the Westernised university needs to be decolonised.