Marx & Philosophy Review of BooksReviews‘Darwin’s Unfinished Symphony: How Culture Explains the Evolution of the Human Mind’ reviewed by Patrick Ainley 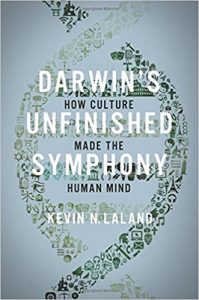 Not so long ago – certainly on an evolutionary timescale – it was received wisdom among many Marxists that Marx and Engels had completed Darwin’s Unfinished Symphony. Whether or not Darwin turned down Marx’s offer to dedicate Capital to him (on the reasonable grounds that he had not read the volume Marx sent him), Marx definitely considered The Origin of Species as ‘the basis of natural history for our views’, even though he also thought Darwin’s theory influenced by contemporary capitalist economics. So much so that Engels elaborated The Part Played by Labour in the Transition from Ape to Man, where he declared ‘labour begins with the making of tools’. Tool use was long considered a distinguishing feature of humans compared with other animals by those as late as Jacob Bronowski in 1973 presenting The Ascent of Man, if not via all the stages from lower savagery to upper barbarism through which Engels followed Morgan in tracing The Origin of the Family, Private Property and the State.

As Laland shows in the many examples of animals using tools across the panorama of evolutionary emergence marshalled in his book, this previously accepted distinguishing feature of humanity has long lost its uniqueness. Nevertheless, demonstrating ‘a major gulf between the intellectual capabilities of humans and other animals’ (231), ‘is a necessary platform for this book’ (16). Not because ‘the primate brain expanded to cope with the demands of a rich social life’, which is ‘The currently dominant view’ (144), but because of the significance of evolutionary feedback, i.e. learning from experience, which many animals – from fish to frogs, crabs to crows – pass down their generations in the form of cultures.

This is different from what is called epigenetics, which also explains the inheritance of stable traits without change to DNA, especially through the extraneous activation and suppression of gene expression, but it has similar effects in speeding up evolution. Laland is thus not alone in meeting the objections of those for whom the succession of inherited accidents recounted by neo-Darwinism cannot account for all the intricacies of evolution. This idea of acquired animal cultures augmenting inherited behaviour is not new and is widely observable in the regional variations of birdsong, or the use of tools by monkeys and many other animals, including innovations which are then adopted and adapted by successive generations. However, for Laland this acceleration became exponential amongst a restricted family of primates, the hominidae, which developed language to enable the transmission of culture by teaching.

Symbolic language, as distinct from the often elaborate signalling systems of other creatures, is another crucial marker that, like tool use, is often claimed to distinguish the species homo from other primates. As another tool, language is seen as co-evolving with the use of tools by what Darwin called ‘the law of correlation of growth’ through which, as Engels described it in the Transition, ‘Changes in certain forms involve changes in the form of other parts of the body, although we cannot explain the connection.’ Laland can as he mathematically models the selective advantage conferred by hand, eye, voice and brain co-evolution to assert, ‘Language originally evolved to teach, and specifically to teach close relatives.’ (191) Laland therefore sees teaching as unique to humans – with the possible exception of cats. It imparts the hierarchical syntax that structures the forms languages take, giving all languages the underlying generative grammar that Chomsky derives from a supposed universal Language Acquisition Device innate to humans. Instead, ‘Human language is unique (among extant species) because our species uniquely constructed a sufficiently diverse, generative, and changeable cultural world that had to be talked about.’ (192 in the Chapter ‘Why We Alone Have Language’) ‘We’ thus ‘constructed our niche’ through ‘our species capacity to control, regulate and transform the environment … chiefly due to our extraordinary capacity for culture’ (230) and for cultural transmission through teaching, which Laland defines as ‘behaviour that functions to enhance the fidelity of information between tutor and pupil’ (his Italics p.158).

Although he occasionally writes of ‘coaching’ and ‘training’, this pedagogic conception of cultural learning and language ‘as an adjunct to teaching’ (318) is an impoverished one because Laland neglects what has been called The Tacit Dimension of building a culture through apprenticeship to it. He therefore misconceives learning and teaching by reducing them to their basis in copying for the competence imparted by training. The imaginative leap to understand new knowledge or achieve skilful performance is thus lost, whether acquired for the first time by novices or introduced as a new discovery or improvisation. Because such acquired characteristics are not heritable, this whole expanding corpus of human culture has to be relearnt by each new generation. Indeed, Resnik and other US psychologists who translated Vygotsky’s Marxism into ‘activity theory’, present children as little apprentices picking up the cultures and subcultures into which they are born by learning on the job as it were. Beyond a Chinese whispers effect, this entails losses and gains since cultures are not transmitted unchanged but are themselves altered in practice. This is an essential part of the dialectical conception of praxis – simply the Greek word for human action. The transmission of culture is therefore more than mere copying, otherwise no change would be possible and as Marx wrote in Capital,

A bee puts to shame many an architect in the construction of its cells; but what distinguishes the worst of architects from the best of bees is namely this. The architect will construct in his imagination that which he will ultimately erect in reality. At the end of every labour process, we get that which existed in the consciousness of the labourer at its commencement.

Laland’s pedagogic notion of cultural transmission not only unpoetically lacks imagination – ‘the Human Being itself’, as Blake called it – but also misses the philosophical depth of Engels’ emphasis upon tools – including language – that is more than technological determinism but which serve to distance consciousness from the reality it is focussed upon, thus giving us ‘an interpreted world’ in which even ‘the knowing animals are aware / that we are not really at home…’ (Rilke).

Laland is repeatedly in ‘awe if not wonder’ at the vast accumulation of commodities he sees all around him, evidence to the coordination of the capitalist enterprises involved in effecting the voluntary cooperation to assemble and move these goods around the world. He argues ‘The large-scale cooperation observed solely in human societies arises because of our uniquely potent capacities for social learning, imitation and teaching, combined with the co-evolutionary feedbacks that these capabilities have generated on the human mind.’ (281) However, far from seeing genetic propensities shaping behaviour as sociobiology does, Laland recognises that ‘the gene-culture leash tugs both ways’ (229). Our potent culture and the genetic feedback it generated resulted in the human development that his book explains by the teaching theory of cultural transmission. Laland can then account for the apparent stasis of Oldowan technology, when for some 700,000 years stone tools did not alter very much amongst humans and their close relatives, by the catching up necessary for proto-languages to evolve into more effective communication. Once that happened, the momentum was unstoppable and exponential. Only it wasn’t, as Engels shows clearly if schematically.

Engels’ explanation is also an example of his Dialectics of Nature which have long been almost universally derided (including by many Marxists) as mechanical and outmoded, but which have resurfaced recently in complexity theory and elsewhere to show how emergence involves progression from a lower to a higher level of determination with the new forms of existence taking control of the system by a process of maturation to a new whole that is more than the sum of its previous parts. In the case of what Engels called the primitive communism of classless tribal societies, age and gender were the principle divisions of knowledge and labour, but once the council of wise old men had been usurped by their sons and new king-priests installed by the warrior class violently imposing their new state through their monopoly of weapons, a new dynamic controlled the direction of social development. Previous taboos on the inheritance of wealth by sharing it amongst the whole tribe were broken and reversion to earlier forms – of matriarchal rule, for example – were ruled out. The new more or less violent struggles that arose between classes now determine social development and are often acutely manifest in culture where ‘the ideas of the ruling class are in every epoch the ruling ideas of society’, as Marx said. Nevertheless, they do not go uncontested by the sub-, counter- and not only class-cultures that contend with them in multiplely divided societies. Consequently, today what is produced and how is usually decided by owners or shareholders seeking profit who generally have the last word over how to deploy new technologies to maximise output. There is not therefore a simple exponential development ever onward and upward but a series of crises of overproduction and speculation leading from boom to bust. So the logic of cultural evolution is not identical to that of biological evolution with ‘memes’ supplanting genes. ‘Biology provides no substitute for a comprehensive historical analysis,’ Laland concedes in conclusion (314) but then asserts ‘Human culture is indeed amenable to evolutionary analysis’ (320). This is not the usual evo-devo but is just as reductive in its own way.

Despite all the exemplary reference to inter- and cross-disciplinary archaeological studies, mathematical modelling and artistic collaborations that Laland details, his frame remains one of science narrowly conceived and not extended to even the possibility of a social science. In what calls itself a University (St. Andrews) this is bizarre; especially in an epoch – which Laland labels the ‘anthropocene’ (more precisely the ‘capitalocene’) – requiring sustainable development to preserve what is left of the ‘endless forms most beautiful and most wonderful’, whose origin Darwin had delineated but which humanity, as the one species self-consciously aware of its own existence, is in danger of destroying along with itself. The violent origin of civilisation emphasised by Engels but neglected by Laland explains the self-inflicted intra-species mass violence, again often claimed to uniquely mark humanity. In the ‘more or less subdued civil war’ within class societies – not the unity Laland supposes – this unconscious legacy is augmented by the symbolic violence of culture. This reinforces whilst simultaneously occluding through its religious and other ideological forms the root violence of class and gender oppressions. Violence is also amplified by technology, especially when inflicted by one people upon another in imperial conquest. However, from the natural scientific perspective which Laland maintains, ‘The Evolution of Intelligence’ celebrated in Chapter Six as ‘the ability of an animal to solve problems, comprehend complex ideas, and learn quickly’ (125), appears less of an achievement and more of a possibly lethal mutation.