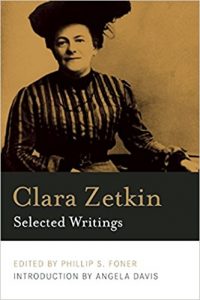 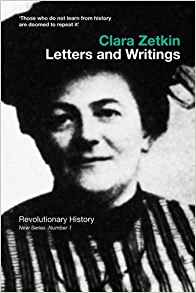 Ken Cheng recently completed a PhD at the Centre for European Studies, UCL, which examined pre-1914 …

Clara Zetkin is more renowned as the loyal ally of her brilliant contemporary Rosa Luxemburg than as a significant Marxist thinker in her own right. Amongst the Marxist intellectuals of the pre-1914 German Social-Democratic Party (SPD), she is generally regarded as a writer of the second rank – a committed revolutionary whose articles filled the pages of socialist journals, rather than an active participant in epochal debates over ‘revisionism’ or the ‘mass strike.’ In August 1914, when a majority of Social Democrats acquiesced to Germany’s mobilization for the First World War, Zetkin aligned with Luxemburg’s anti-war ‘Spartacus League.’ By her own estimation, Zetkin was no more than a foot-soldier for ‘Rosa … the leading voice in Socialism’ (SW, 144).

Two recently-published selections of Zetkin’s writings offer different reasons for giving her work a higher billing. Selected Writings highlights Zetkin’s importance as a ‘pioneering theorist of women’s status in capitalist society,’ who laid the foundations for a ‘Marxist analysis of women’s oppression’ (SW, 9). It focuses on Zetkin before and during the war, when her political activity revolved around the editorship of Gleichheit, the official SPD journal for socialist women. Letters and Writings shifts attention to the post-war period, once the SPD’s capitulation in 1914, the 1917 Revolution, and the assassination of Luxemburg in 1919 had utterly alienated Zetkin from German Social Democracy. As the most prominent surviving Spartacist, Zetkin became something of an elder stateswoman within international Communism, as epitomized by the final text in the collection – her ceremonial 1932 address to the Reichstag as its oldest member, which expressed hopes for a future ‘Soviet Germany’ (LW, 173).

The pre-war texts gathered in Selected Writings outline Zetkin’s theory of the ‘proletarian women’s movement’ (97). The basic co-ordinates of her argument were clear. Since ‘female industrial labour’ had become an integral part of ‘modern industry,’ women who were formerly ‘slave[s] of the husband’ were now ‘subjugated by the capitalists’ (47). The ‘bourgeois women’s movement’ sought equality without challenging the capitalist system at the root of their oppression, dooming it to ‘clumsy and groping steps’ (68). Consequently, ‘the liberation struggle of the proletarian woman … must be a joint struggle with the male of her class against the entire class of capitalists’ (77).

Zetkin’s views took shape within the framework of German orthodox Marxism – a ‘scientific’ interpretation of Marxism associated with Friedrich Engels and Karl Kautsky, which the SPD officially adopted in its 1891 ‘Erfurt Programme.’ Believing that the political ascent of the industrial working class was written into the course of modern social development, German orthodoxy was resistant to any dilution of the SPD’s ‘proletarian’ politics. Was Zetkin’s theory therefore an attempt, in effect, to subordinate women’s liberation to the prioritized workers’ struggle? Some of her statements might support such a claim. In an address to the SPD’s 1896 Gotha Congress, she avowed that: ‘The petty, momentary interests of the female world must not be allowed to take up the stage. Our task must be to incorporate the modern proletarian woman in our class battle!’ (79). (At this point, the transcript records appreciative cries of ‘Very true!’ emanating from the primarily-male congress audience.)

Behind such slogans, however, lay a more nuanced perspective. Zetkin did not flatly assert that women were being oppressed more by capitalism than by men, but sought to capture the dialectical significance of women’s work as a social development. Female industrial labour was dependent upon machinery, which mitigated the need for ‘muscle power’ (53). Over a broader timespan, the rise of machinery had also gradually ‘undermined domestic production’ in a way that increasingly forced women ‘to find their livelihood and their meaningful lives outside of their families and within society’ (73). Whilst being drawn into the capitalist workforce obviously subjected women to exploitation, women’s work also represented a potentially revolutionary opening. The restrictions of traditional family life had been torn down, and an unprecedented number of women now had the chance to ‘found a meaningful life’ in the arena of society, and thus to participate in ‘the awakening of modern individuality’ (72).

Of course, for proletarian women, the realization of this ‘individuality’ was indissociable from the development of class-consciousness and participation in the socialist struggle. Zetkin’s theory was ‘Marxist’ above all in its desire to link the progress of the women’s movement to the dialectical vision of the Communist Manifesto, according to which capitalism revolutionizes society by demolishing the traditions that obstruct its productive forces, paving the way for its ultimate liberation by an enlightened proletariat. This intellectual inheritance was acknowledged in the 1903 article ‘What the Women Owe to Karl Marx’: ‘the materialist concept of history … enabled us to understand the women’s question within the flux of universal historical development’ (93).

The second half of Selected Writings is dominated by the dramatic events that unfolded between 1914 and 1919. Zetkin’s response to the war echoed the main motifs of the ‘Spartacist’ opposition: disdain for the rising tide of chauvinistic nationalism, and hope that the proletariat could rise against this insanity. Theoretical precision was overtaken by impassioned rhetoric in these writings, undoubtedly in compensation for the objective powerlessness of the anti-war minority. This, however, was a conscious and perhaps even strategic recourse to language, as made clear by Zetkin’s 1914 appeal ‘To the Socialist Women of All Countries’:

It is true that we women have only limited political rights in practically all countries, but we are not without social power. Let us make use of every tiny bit of this power. Let us use our words and actions in order to influence the narrow circle of our family and friends as well as the broad public. Let us use every means of oratory and writing. (115-16).

Here, movingly, the resilience of the women’s movement against its lack of political freedoms in peacetime provided the analogical basis for Zetkin’s ethos of steadfast minoritarian opposition to the war. It is also notable that, in this context, women could return to acting within the ‘narrow circle of … family’ without thereby relinquishing their ‘social power.’ No matter how the voice of women was coercively domesticated, it could now always maintain a clandestine path to the ‘public … by means of … writing.’

Selected Writings offers only a handful of texts after 1919; for a comprehensive view of Zetkin’s post-war activity, one must instead turn to Letters and Writings. Arguably, this also means turning from writings of broad theoretical interest to those of primarily historical interest, particularly for scholars of international Communism. (Here it may be noted that this collection doubles as a volume of the journal Revolutionary History, and includes a set of unrelated articles and reviews.) This certainly applies to many of the letters included, such as a sequence written to Lenin between 1918 and 1921. In these, Zetkin deals with organizational and propagandistic matters, and offers her reactions to the political fortunes of German Communism. Although arcane references are adequately glossed through footnotes and the biographical articles that intersperse the whole collection, these letters perhaps still suffer from a lack of contextual framing – not least due to the absence of Lenin and others’ replies to Zetkin, which might have given a better indication of her position within the Communist universe of the time.

Two important theoretical works stand out from this material. Zetkin’s 1920 ‘Guidelines for the Communist Women’s Movement’ translated her pre-war theory into Comintern discourse. The basic co-ordinates of the ‘proletarian women’s movement’ remained, but they were now expressed in a more categorical fashion – aided by the fact that the pre-war distinction between movement (Social Democracy) and ultimate ideal (socialism) had now collapsed into one: ‘Communism, the great saviour of the female sex’ (45). Equally notable was the extent to which Zetkin’s standpoint was still affected by the SPD’s capitulation of 1914, and the ‘gap between theory and practice’ that this had revealed (50). Zetkin now diagnosed a parallel failing in the attitude of the Second International towards women’s equality and liberation. Although it had ‘br[ought] these demands to the broadest circles of society in a propagandistic fashion,’ it had not fully translated them into action, such as when it ‘tolerated its affiliated organisations … advocating a restricted suffrage for ladies’ (50). Zetkin was thus an advocate of Communist centralism, requiring that national ‘parties recognise the fundamental, tactical and organisational guidelines of the Communist International’ (52). ‘To draw women comprehensively into all struggles’ and make efforts towards the ‘enlightenment of proletarian women’ became matters of party discipline (52-53).

Most compelling, however, is Zetkin’s 1923 report to the Comintern on ‘The Struggle against Fascism.’ Alongside a careful description of the social composition and political formation of Italian fascism, Zetkin also posited that its ideological appeal to the ‘masses,’ and even to some ‘revolutionary-minded proletarians,’ reflected ‘disillusionment’ with ‘the slow motion of the world revolution’ (92-93). This mass-ideological dimension, mildly reminiscent of later Frankfurt School thought, gave Zetkin’s analysis here a suppleness that was occasionally stymied by orthodoxy in her other writings. A concept that had always inhabited Zetkin’s work in an almost mechanical fashion – namely, the ‘masses’ – was suddenly activated into a powerful, critical tool.

Between the two collections, the only duplicated text is the aforementioned Reichstag address. Each volume therefore serves a distinct purpose, with Selected Writings providing a rounder summary of Zetkin’s theoretical contribution, whilst Letters and Writings is of more specialist interest. Overall, these collections portray Zetkin as a distinctive socialist thinker in her own right, whose efforts to insert the experience of proletarian women into the dialectical panorama of historical materialism should inform our understanding of pre- and post-1914 revolutionary Marxism.